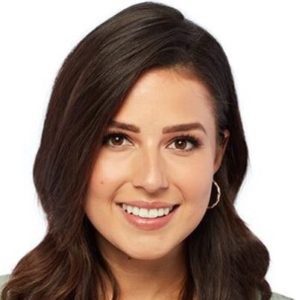 Read interesting details and wikis about Katie and wait for the big reveal.

Katie Thurston was born on 3 January 1991, meaning she was 30 years of age as of Aug 2021. Furthermore, considering that her birthday was on the 3rd of January, we can say that her zodiac sign was Capricorn.

Not much was known about Katie’s parents or her siblings. In one episode of The Bachelor, Katie Thurston said that her father had died. Speaking to fellow contestant Sarah Trott, she revealed— “My dad passed away in 2012, so I 100 percent encourage you to be with him. If I could get back the minutes I had with him … I understand that more than I would like to. Knowing that, yeah that changes everything. And I missed out on my goodbye to my dad, so I would never want that for you.”

According to heavy.com, Katie was 21 when her father passed away.

Katie’s hometown was Renton Washington, where she was still based on.

Katie Thurston was a woman of modest height and stood at a height of 5 ft 6 inches. And she was also a very fit person and weighted just 54 kgs.

Katie was huge on social media, and across all platforms. On Instagram, she had 89 posts and a massive following of 924k by Aug 2021. On Twitter, she had 95.2k followers.

Katie’s most prominent presence, however, was on TikTok. On TikTok, she entertained over 428k followers and 2.6M likes. Moreover, she had once gone viral on TikTok when she told a story about how he pooped at pants during work.

Katie also had a Youtube channel with over 500 subscribers, but there was no content on the channel.

Professionally, Katie Thurston was a personal banking consultant working for First Financial Northwest Bank‘s Edmonds Branch. She had been in the banking sector for over 10 years now [2021].

Apart from her work at the bank, she also did a lot of volunteering work for the Snohomish County’s School Days school supply and backpack drive. She and her co-workers from the bank distributed school supplies to the school children.

At this point, there was no information about Katie’s education. We do not know where she went to college. Katie, however, attended Lynnwood High School in Bothell, Washington. She was a member of the school’s volleyball team, playing as the libero.

According to some financial analysis sources, the average salary of a banker in the US was $97k with some additionals bonuses averaging $16k. That meant, Katie was likely to earn somewhere around $103k per year. Furthermore, her estimated net worth was $750 thousand.

Katie Thurston came to the public eye when she became one of the contestants of the 25th season of The Bachelor. 37 women were fighting for the admiration of the Bachelor Matt James.

Matt James was the first bachelor of color in the entire franchise. He was actually to be a contestant on the last season of The Bachelorette, but after all the melodrama of the season (read here), he was chosen as the lead of The Bachelor.

Matt was from Raleigh, North Carolina, but was currently based in New York. He was a real estate broker and a charity founder.

Katie made a great impression on her stint at Matt’s The Bachelor. She had an amazing rapport with Matt because of her sense of humor and natural charm. She had also become a fan favorite.

At one point she spoke out against bullying and supported a contestant (Sarah Trott) who was ganged upon by other contestants of the show.

However, Katie was unable to book the final birth of the season and was eliminated just out of the final four after a 1-on-1 date with Matt. Matt’s final four include Rachael Kirkconnell, Michelle Young, Bri Springs, and Serena Pitt.

Well, the rumors started when Bachelor Nation insider Stephen Carbon posted on Twitter that Katie Thurston was announced as the next Bachelorette. Of course, considering that Katie was a fan favorite, everyone was just ecstatic. But later, Katie came to Instagram and said that such info was news to her as well, meaning she had no idea about being the next bachelorette. That meant it wasn’t sure yet if who was going to be the next Bachelorette.

The rumors, in the end, proved true. During The Bachelor: After The Final Rose episode aired in March 2021, Emmanuel Acho announced Katie would take the lead in Season 17 of The Bachelorette. She described her season as the “Big Reset”.

By the time her Bachelorette season ended, Katie Thurston chose Blake Moynes and ultimately accepted his proposal. As of August 2021, she was still engaged to Blake.

Katie has high standards for her ideal partners. She has described her ideal partner as the “man who can laugh along with her but is okay with him laughing at her too when the moment calls for it”. Furthermore, her ideal man should be mature and should have ambitions to succeed in everything he does.

Katie herself was an adventurous person with a lot of sense of humor, as was seen on The Bachelor. Also, she was passionate about sex positivity, loves pets, and wants to be a talk show host someday.