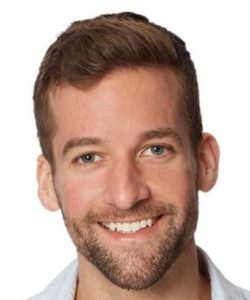 In the midst of all drama, the 17th season of The Bachelorette with Katie Thurston as its title lady premiered on the 7th of June 2021. By 15th June, 4 episodes had aired and the competition this season looks tough. And of the main contenders of the show was Connor Brennan.

In this article, we shall not only cover all the interesting detail about Connor, like info about his parents, former girlfriend, as well as his height. But we shall also tell you Connor’s fate in The Bachelorette as the show has already been shot. Read along dear readers.

Connor was one of the 30 men trying to win the heart of Katie Thurston in the 17th season of The Bachelorette. According to his profile on the channel’s (ABC’s) website, Connor was an “eighth-grade math teacher (from Nashville, Tennesse)…With a master’s degree in medical physics and a resume that includes nuclear engineer as a job title.”

The website describes his ideal woman as “genuine, kind, socially accepting and open-minded…someone who will build him up and will love his family as much as he does.” The website also mentions that Connor loves to dress up and is proud of his tux. And he dreams about visiting Italy.

Katie was one of the contestants in the 25th season of The Bachelor. She was very vocal during the show, speaking out against bullying, and had become a fan favorite at that. In March 2021, Katie was announced as the Bachelorette for the 17th season of the show.

The seventh season of Bachelor in Paradise aired in between two seasons of The Bachelorette, one that aired in Summer 2021, i.e. of Katie Thurston, and the one that was announced for Fall 2021, i.e. of Michelle Young.

There were some interesting aspects of the new season of the show. Apparently, there was a rotating slate of guest hosts. Until early July 2021, only one contestant had been confirmed, Joe Park. Joe was one of the contestants from Tayshia Adams’s season of The Bachelorette.

Apart from Joe, Connor Brennan was also suspected as a possible candidate in the show. The confirmation didn’t arrive mid-July 2021 when Connor took to IG and announced his participation in the show.

Early on the show, Connor established a connection with Maurissa Gunn. However, the connection faded away quickly. By Episode 5, he was seen venting about not being good enough. On his last day on the reality show, Connor shared a song he wrote for fellow participant Jessenia.

In Sept 2021, reports began surfacing that Connor B. might be dating fellow Season 7 alum, Victoria Paul. A TikTok video located them dancing at a Nashville club. Adding fuel to the fire, a TikTok profile with the username @connorfalcon1 commented “They’re married now” on the video.

Now, let us get back to the basic facts about Connor’s life. Connor Brennan was born on 8 March 1992. As of Sept 2021, he was 29 years of age. And because of his 8th of March birthday, his zodiac sign was Pisces.

Connor Brennan is very close with his family. Both of his parents are featured quite often on his social media, especially on festive occasions. We do not know the name of his father but his mother’s name is Lisa Brennan and she is a published author. She has a book called The Auditorium in My Mind: Treasuring My Transgender Child published.

And yes, Connor also has a sibling, apart from his parents, in the family. And the said sibling is a transgender woman. Her name is Deirdre Brennan. The entire Brennan family is very supportive of Deirdre’s identity. In fact, Connor even wore a trans flag ankle bracelet during his Bachelorette appearance to support his sister.

The Brennan family is also very fond of music. Connor himself was a musician. His father played the violin; his sister played the drums.

Connor Brennan stands at a tall height of 5 ft 11 inches. His other distinct features include his brown hair and his light-green-light-blue eyes.

As of Sept 2021, Connor was not a very big social media user. He was present on Instagram and although he did not post that often, he had a decent following of 138k. He was also present on Facebook but nothing fancy there. His last public post was in November 2019. And he was not present on Twitter.

As we have already mentioned, Connor Brennan’s current job is that of an eighth-grade teacher. Connor teaches math and music. In June 2021, Connor posted a photo and a long caption detailing his first year as a teacher. In the post, he thanked the school, his co-teachers, as well as his students.

Going a few years before that, Connor used to be a spin instructor, i.e. he taught exercises related to indoor cycling. Connor was also an ardent cyclist and he also used to dream of becoming a cycologist. He used to work for Cyc Fitness Wisco.

And while he was working at Cyc Fitness Wisco, he was dating one of his co-workers, Katie Christensen. Katie is also an ardent cyclist but also worked at Saint Thomas – Midtown Hospital. Connor and his former girlfriend Katie still have some presence on each other’s Instagram. The last time they were together was in early 2020. They must have broken up in 2020.

Apart from that, Connor is also a musician. You, dear readers, already know how Connor loves to jam with his father and his sister. However, Connor has already released an EP on Spotify. Connor not only sang very well, but he also played a variety of instruments like piano, guitar, ukulele, accordion, etc.

Talking about his education, Connor went to Illinois State University and graduated in 2014 with a Bachelor’s degree in Physics. He also had a master’s degree in physics but we do not know from where.

Anyway, an average middle school math teacher in Nashville earned about $48k. However, since Connor was a rookie teacher, his salary must fall towards the lower end of the range, about $38k – $40k per year. Also, as of 2021, Connor Brennan had a net worth of about $400 thousand.