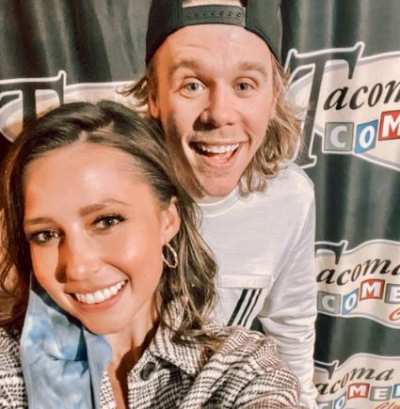 After Katie Thurston‘s season of The Bachelorette on June 7, 2021, people were more than ever prying on her past relationships. And thus popped the name Andrew Rivers, her ex-boyfriend.

Lately, he drew attention to himself as he posted on Instagram that he is more than excited to watch Katie’s journey to find love on ABC’s dating and relationship reality TV series.

Andrew who is also a stand-up comedian mentioned his ex. and now-friend Katie in one of his acts titled “Vent with Katie 🌹” in Apr. 2021.

He shared how their awkward Tinder date turned them into best friends. Wittily, he went to say, “she’s hilarious and I taught her everything she knows. Lol. I can see why she did so well on the bachelor, she’s very manipulative. 😉🌹.”

He also revealed how one night, they were supposed to go out but Katie got a nosebleed.

So, from the looks of it, it was just a casual fling they had, and later they seemed to have become more like friends. And recently, i.e. on June 8th, 2021, he wished her on her stint as the Bachelorette via an Instagram post. He shared a memory of them and to it wrote:

“Just about Katie Thurston’d my pants when I found out she was on the bachelor and am excited to watch her as the Bachelorette this season. She’s one of the funniest people I know and I pray she lets me perform on her arena tour some day. 💩🌹😂”

Early in 2021, Andrew displayed just as much affection when Katie was one of the contestants on Matt James’s season of The Bachelor.

Before and after Andrew, Katie reportedly dated the Bachelors’ Matt James and Tyler Cameron and a mystery man of Taiwanese origin.

Who Is Andrew Rivers Girlfriend Now?

Andrew shared when it comes to dating, he is like a cicada and “mates every 17 years.” He also revealed on a June 2 (2021) episode of his father’s podcast, The Bob and Zipcast with Ed Kelly, that he auditioned for a new dating show called Mating Season.

Now we know why he gave this instance about cicada and mating. The dating game show he participated in is about eligible women and men finding their true love in animal style. With truly animalistic challenges the contestants were to win over their potential mates.

Andrew meanwhile dubbed the show as “Survivor and Bachelor together”, and also said it was perfect for him.

That been said, at the time, Andrew Rivers was single, had no girlfriend, and therefore was looking for one.

Reportedly born in 1985, Andrew Rivers should have reached the age of 36 on his 2021’s birthday that is marked by April 12th.

Seattle-based Andrew Rivers comes from quite a famous household. His father Robert Rivers, age 64, is a retired American rock and roll radio on-air personality and renowned producer. Also, they know him as a songwriter of Christmas parody songs. His album “Twisted Christmas” was certified gold by the Recording Industry Association of America.

Andrew occasionally displays his parents and sibling on his social media.

His only brother, Keith Rivers, is an award-winning director with a passion for “uniting captivating visuals and anthem-driven narratives in his work across numerous genres.”

Andrew shared, his professional director brother is behind many of his best pictures on social media.

Andrew Rivers, who soon hoped to take his show back out on the road, stands to a height that is above 5’11” or 1.80 meters.

Besides, he also has a YouTube channel which is basically an amalgam of his stage acts and his ‘Father and Son Podcast’ videos (that he does in collaboration with his dad). Andrew shared, working with his father, he has learned to coordinate his own shows.

So far, the channel has entertained 4.78K subscribers. And dring the first wave of the Covid pandemic in 2020, he wrote and released a 25-minute pandemic special including only the covid jokes that hit 100k views on the platform in 2 months.

Andrew Rivers reportedly had almost an estimated $450K net worth (before 2021).

As a comedian, he is a regular opener for Christopher Titus and has toured across North America and Europe with Steve Hofstetter.

Andrew was featured in the famous “Truth or Drink” Buzzfeed’s web series. Also, his DryBar Comedy Special has over 15 million views on Facebook.

All in all, he performed across the world and his acts got featured in many news outlets as well, and has also been running his own business via Andrew Rivers’s online merchandise store.