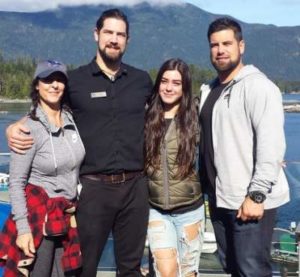 With only two episodes left in Katie Thurston‘s season of The Bachelorette, Katie spent S17 E08 aired on Jul 26, 2021, meeting her finalists’ families. Blake Moynes being one of them took Katie to meet his family on an all-important hometown date.

The Canadian wildlife manager and hockey buff also dated former bachelorettes Clare Crawley, Tayshia Adams, on each of their seasons, but this season is the only time he made it so far, and the first time his fans get to meet his family.

So, here’s writing dedicated to your favorite contestant Blake Moynes family that includes his mom and two siblings.

Blake Moynes does not often talk about his dad. The reason is, his parents were separated when he was very young; and so Blake was brought up by his mother alone, according to The Sun.

But also from what Blake wrote on his Instagram in late-Dec. 2020, one can tell there is no bad blood between the two.

Getting changed at home before his hockey game, like the old times, Blake had shared how the moment reminded him of those cold, dark, early morning practices as a kid. How his dad used to do his skates they had Tim Hortons’s hot chocolate on the way there and McDonald’s muffin on the way home.

Blake Moynes’s Emily Moura Moynes was born in Portugal and moved to Canada at the age of 7. She was raised in a very traditional Eastern European household. As an author, she also discussed her not easy upbringing stories in her writings.

Emily revealed how she suffered through struggles, bumps, and bruises in life, but she refused to let all those define her.

She claimed her book “Rising: Take Charge, Break the Cycle and Rebuild a Kick-A** Life”,  to be her through self-discovery, self-improvement, and self-awareness following the demise of her marriage.

Now in her 50s, Emily looks much younger, working multiple jobs as a life coach, business owner, fitness enthusiast, and of course, an exceptional mother. Some time ago, she was also starting a podcast.

Blake’s sister is Taylor Moynes. Judging from her grid on Instagram @taylormoynes, as of 2021, she lived in Canada, had a boyfriend named Justin. Just like her mom, she is also an animal lover. She especially loved her dogs. And just like everyone in the family, she is also a fitness fanatic.

By Jan. in  2020, Taylor was 3 years into her “remarkable” weight loss transformation and was “going strong.”

Until May 2021, Taylor was proud to be in a relationship with her boyfriend who you may see on his IG @justin_xlsr.

To a moment captured of him and Taylor’s adorable chocolate doodle, the Bachelorette star’s sister took to her IG to congratulate her beau on his new job.

“You make me so proud. Everyday this guy lights up my life. You deserve all the good things in this world, starting with this promotion. New job, who dis. 😎💟”

Not to miss, during the family meet-up in the Bachelorette, Taylor stole the show when she absolutely dragged her brother finding “the one” three times in just a little over a year and a half.

Taylor, after meeting Katie, had sat down with Blake, to find out whether or not he had said “I love you” to Katie of course. And when he told her how quickly he was falling for Katie, she had immediately called him out with “So this is the one now? Is this the one?”

And when Blake said ‘yes’, Taylor went on:

“Yeah, but you were so set before you even met Clare [Crawley]. You were like, ‘I love her, it’s gonna work.’ And then that was off the table in how long? And then Tayshia [Adams] came in, you’re in love again like right away. You get to the point where you just say that like, ‘She’s the one.’ Like, what do you mean?”

Then, there is Cody Moynes, Blake’s only brother. Cody is a full-time commercial pilot and flight instructor at Spectrum Airways, which is a flight training/career College in Burlington, Ontario. He started his journey in the airways in Dec. 2018 with Ramp/Dispatch.

Before this, Cody was a performance coach at Shield Performance and also mentioned having worked as a bartender at MLSE.

While in high school, Cody used to be a star footballer, all the while studying for his Biology major.

Cody graduated BSc. with honors from the University of Ottawa in 2016. He was also on the college’s Varsity football team. All those years he was enrolled there, Cody closely participated in the Student-Athlete Council, worked as a camp counselor, and assisted his football team’s coach.

Blake Moynes was born and bred in the good weather of Burlington city, in the northwestern end of Lake Ontario in Ontario, Canada.