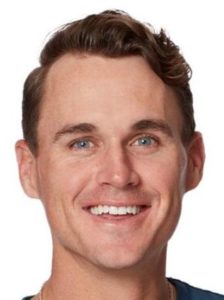 Dear readers, you might have read a lot of articles about Bachelorette contestants but you have not read anyone like Mike Planeta, the topic of this article. While this season’s Bachelorette‘s lead Katie Thurston was espousing a sex-positive attitude, Mike was a man who had gone in the other direction and sworn to remain a virgin until marriage.

Read everything you need to know about Mike, his journey this Bachelorette season, and all other tiny-winy info like his age, height, religion, etc. in this Mike Planeta wiki below.

Mike Planeta was one of those men. Mike Planeta is a retired baseball player with handsome features but unlike the general perception of handsome athletes, Mike is not a “player”. In fact, Mike describes himself as “basic”. He is nothing but. Mike’s goal in life was to visit at least 100 countries of the world.

There is one unique thing about Mike, which most certainly was not true for most of his competitors in the show. He had chosen to abstain until he got married. This is in sharp contrast to Katie’s position of sex positivity. During the recent episode of the Bachelor Happy Hour podcast, Mike explained his celibacy and what he wanted Katie to know.

“I want Katie to understand that I don’t think there’s anything wrong with being sex-positive. I personally want to share that within marriage, that’s me. I mean, if I fall in love with Katie, maybe that’s something that we can, you know, take that road together.”

Mike opened up about his virginity to Katie during the recent sex-themed group date. His honesty eventually won him the date rose in the episode. As of 30th June 2021, in the episodes that have aired, Mike was still in the race. However, according to Reality Steve, the ultimate, revealer of the happenings in the Bachelor franchise, Mike was not among the top four of this season’s Bachelorette.

According to his profile on ABC‘s website, Mike Planeta’s ideal partner was a woman “who loves staying active, will make him laugh, and most importantly, has the same set of values as he does.” The profile further added, “Mike’s family is extremely important to him so, ideally, he is looking to find someone whom his parents and three sisters absolutely adore.”

Because he grew up in a loving family with immense faith, Mike Planeta is a very ardent follower of the Christianity religion. You might have guessed as much from his decision to remain celibate until his marriage.

In addition to his parents, Mike has three siblings, all sisters, Mary Kate Planeta, Claire Planeta, and Colleen Planeta. And all three siblings of his are also very devout Christians.

Apart from his parents and his siblings, there was also a grandmother, mother of his mother, Ethel V. Keenan, who passed away in 2009 at the age of 29.

Mike Planeta stands at a height of 6 ft 4 inches and weighed about 83 kgs. His other physical features include short dark hair and blue eyes.

Mike was only present on Instagram among the many social media platforms. And he had a decent following on Instagram. As of 30 June 2021, he had 25.5k followers on the platform.

Profession-wise, Mike Planeta is a former baseball player who played for five seasons in MLB for Baltimore Orioles. He was drafted while he was attending Glendale Community College in Glendale, Arizona at that time. Before that, he had studied at Willow Canyon High School in Surprise, Arizona.

He retired from professional baseball and MLB in 2013. Currently, he works as a gym owner in San Diego, where he also lives. By June 2021, Mike Planeta had earned a net worth not more than $600 thousand.