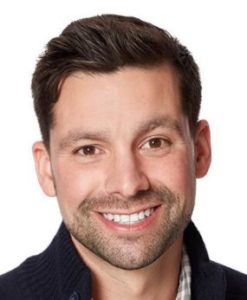 Katie Thurston was the new Bachelorette for season 17 of Bachelorette. Among the contestants trying to win Katie’s heart was a single father of a four-year-old son, Michael Allio.

Read this Michael Allio wiki and also find out if he was able to win the heart of Bachelorette Katie.

Michael Allio’s hometown is Akron, Ohio. And he was born to parents Mark and Shelly Allio. We do not know much about his parents except that his mother’s mother (his maternal grandmother) was Kathleen Ann Jividen, who passed away on 25 August 2019.

Apart from his parents and his grandparents, Michael also had some siblings in the family growing up. He had a sister called Brynn Allio Popa, who is a senior vice president of Strategic Initiatives and Engagement at Greater Akron Chamber. Brynn is already married and had two kids of her own.

There was another elder sister called Janet Allio, who passed away on 26 April 2011 at the age of 54. Apart from two sisters, Michael also had a brother in the family, Alexander Allio, who was 30 years of age as of 2021 and lived in Fairlawn, Ohio.

Michael Allio stands at a tall height of 6 ft. Moreover, he has dark black hair, which he mostly kept short, and brown eyes.

Michael Allio was not that big on social media as of Aug 2021. He was the largest on Instagram, with 205k subscribers. Similarly, on Twitter, he had only 142 followers. He did not even have a Facebook page, just a regular Facebook profile, which was followed by more than 400 people.

Apart from being a father, Michael is a sales manager but also an aspiring entrepreneur. He started his journey with a college education at Loyola University Chicago. He graduated in 2006 with a BBA degree as well as Communication and Media Studies credits.

After college, his first job was that of a Sales Consultant for Novartis. He worked that job for six and a half years from 2006 to 2012. After leaving that job in 2012, he started to work as Vice President of Sales and Marketing at MASCOT Workwear USA. He is still in that job today, after over 9 years.

Apart from his two major sales job, Michael also worked on his own projects on the side. For example, in 2019, he founded The L4 Project, a “socially conscious clothing company” in Cleveland, Ohio. In 2020, he also founded Allstera, a company specializing in sanitation consumer products and personal protective equipment, in his hometown Akron, Ohio.

Michael Allio was married to his wife, Laura Ritter-Allio for over 7 years. He met Laura while they were both attending Loyola University Chicago. The love developed, flourished and they got married in 2012. Michael and his wife had a very happy marriage with a son, who was born on 9 September 2016. They named their son James.

However, not long after their son was born, Michael’s wife was diagnosed with breast cancer in April 2017. She went through the difficult cancer treatment process for over 18 months and it seemed like she was getting better, but cancer returned in late 2018 and this time it was to take her. Laura died in 2019. 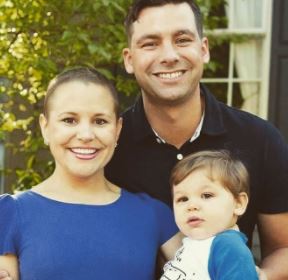 Michael with his now-deceased wife Laura and their son James (PC: Michael’s IG)

When his wife was going through cancer treatment, Michael’s sister Brynn started a GoFundMe campaign to raise money for her treatment. Also, The L4 Project, which we mentioned in the above section, was started in Laura’s memory.

And according to some gossip sites, Michael lasted long on the show but does not last for the final four. Apparently, his departure had something to do with his son. Whether Katie sent him home to be with his son or he left on his own, finds did not know.

The show might not have started to air, but the profiles of the contestants were out and there were a lot of wikis about Michael that we did not know before. For example, Michael loves 90s R&B music and he makes a “mean plate of Dino Nuggies”.

Also according to his profile, Michael’s ideal woman would be compassionate, empathetic, resilient, not easily offended, having witty and self-deprecating humor. He would also prefer one with strong convictions and who “stands up against ignorance”. And all these features were very much Katie’s strong suit. It was a shame that he had to leave the show for his son.

As predicted, Michael quit in Week 7. As for Katie, she would ultimately choose Blake Moynes and accept his proposal.