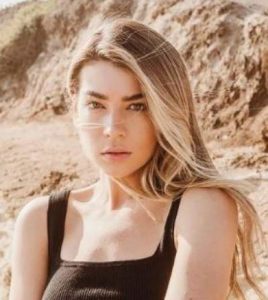 For someone like Sarah, who always dreamed of finding her fairytale ending, could not have landed anywhere better to accomplish it, other than the ABC’s dating game show The Bachelor.

So, she became one of the contestants on Matt James season of the reality TV series that premiered on Jan. 4, 2021.

While the show’s host Chris Harrison hinted at Sarah’s serious romance with Matt during the premiere of the season, predict for yourself her chances of winning the show, as you read all about her.

Like half of the world, Sarah Trott too celebrated her 2020’s birthday home-quarantined. However, as she completed 24 years of age, she pledged on starting the new chapter with much happiness and endless gratitude for her friends and family.

Born on April fool’s day, her zodiac sign is Aries.

Sarah Trott comes from an incredibly close-knit family. She said, her parents are the true example of the “loving and loyal relationship” that she wishes for herself one day.

Her father suffered from ALS, also known as Lou Gehrig’s Disease. Often on her social media, Sarah keeps writing about her dad’s situation. She writes how even the toughest ALS could not stop her dad from having a positive mindset. Sarah, her mom, and the rest of the family could not be more inspired by Sarah’s dad’s optimism and radiating resilience towards the disease every single day.

“You have taught us all how to be grateful and not angry. To be an inspiration and light when the easy option would be the opposite.”

Sarah further wrote how besides being an involved father and mentor to her and her sibling, he is also a loving husband to her mom.

Sarah strictly prioritized fitness and a healthy lifestyle and hoped to see some kind of trait in her ideal partner.

So, the fitness fanatic Sarah Trott stands to good-looking stature of 5′ 8″, and bust-waist-hips– 32(B)-26-32. More to her best features would be her natural blonde hair and green eyes.

Sarah Trott began her journey on The Bachelor by sharing a compelling story about her family. At the time, she revealed how she had left her job as a broadcast journalist to become a caregiver for her dad.

Luckily, Sarah Trott had other jobs to add up to her existing under $300 thousand net worth. She continued hosting the podcast “From Here to Where” which was about goal setting and dream chasing aimed at listeners in their 20s.

Further, she is also a professional model, repped by the Innovative Artists talent agency. As of early 2021, she was signed with Otto Models. According to her profile on NEWBOOK, she charged the typical rate i.e. $100 per hour or $720 per day to those offering her the modeling job.

For college, she went to study Broadcast Journalism, Political Science at the University of Missouri-Columbia. And before, she attended Scripps Ranch High School where she used to be the club president for Rotary Interact.

While Reality Steve already reported Matt would give his final rose to Rachael Kirkconnell, the show’s host hinted otherwise. “Sarah and Matt have a “very up and down journey…[She] hits it off really well with Matt, right away. It’s very strong feelings early…”, Chris Harrison spoke on December 11 as he announced the contestants.

And like always, while the show still ran, there was also this ‘Final 4’ version of the prediction coming from spoiler sources. So, among the 32 contestants, Reality Steve foresighted the viewers to watch out for Rachael and three more names: Michelle Young, Serena Pitt, and Bri Springs. (Yes, Sarah is not one of them!)

But then, of course, these spoilers are all unconfirmed until the season concludes for good.

Originally from San Diego, California, Sarah currently (2021) lived in Los Angeles. And having been in two serious relationships that went nowhere, she landed on the Bachelor to find out if Matt is her ideal partner.

Sarah is an admitted ‘hopeless romantic’ and thus her type of man is someone who will turn every day into an adventure better than the last. Not to mention, the man’s commitment to faith has to be as strong as hers.

As her ABC bio describes, Sarah hopes to one day be in a power couple that when they are not spending time with their kids, they are doing work for the community and giving back to children in need.

View all posts by Neelam