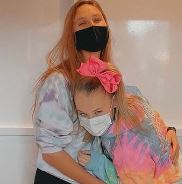 In January 2021, dancer JoJo Siwa “came out” and fans showed nothing but support for the revelation that she made. But on 9 February 2021, she revealed her girlfriend and it was none other than her best friend, Kylie Prew. Ever since the announcement, Kylie has been the center of focus for the people.

So, scroll down this Kylie Prew wiki to learn more about JoJo Siwa’s girlfriend and details on her family and career.

Kylie Prew is 15 years old when this article is penned based on her life. However, the precise date of her birth remains obscure as of this writing. However, Kylie Prew’s birthday and zodiac remain anonymous.

Kylie Prew was born to father Douglas Prew and her mother Narelle Prew. Her father hailed from Miami Springs, Florida while her mother is an Australian citizen. Her parents had her in her hometown of Key Largo, Florida.

More on her parents: Doug attended the University of South Florida Libraries – Tampa campus. Her father worked as a restauranteur. He is the owner of The Fish House based in her hometown of Key Largo. He opened the restaurant with his partner C.J. Berwick and ran it for over 30 years.

Talking about her mother: Narelle Prew started her career in Sydney as a liaison with AAP/Reuters. After traveling in countries like England and South Africa, she settled in Key Largo in 1995.

Kylie’s parents married on 11 February 1996 and have been married ever since. Moreover, Kylie Prew also has a twin sister.

More on her family: her grandfather worked as a commercial spearfisherman passed away because of lung cancer. While his mother fell ill because of Parkinson’s disease. She also has an uncle who owned a seafood market in Tavernier.

Talking about the physical attributes, Kylie Prew stands tall at a height of 5 feet 6 inches (1.67 meters). She has grown her blonde hair a little longer. She has a light complexion and is growing up to be beautiful. Also, Kylie weighed about 44 kilograms (97 kilograms). She is of carefree and outgoing nature.

Coming to social media reach, Kylie Prew is only on Instagram. By Feb 2021, his Instagram account earned 209k followers in total. However, she only posted 14 times on the platform.

Kylie Prew attends Coral Shores High School and is set to graduate in 2022 based in Tavernier, Florida. In high school, Kylie plays forward in the school’s varsity basketball team.

Only a few people might know this but, Kylie is also a very good singer. Her Instagram also holds a video of her singing in her soothing voice. And many believed it was one of the reasons why she fell for her in the first place.

In no time, Kylie Prew will be landing endorsement deals and sponsored posts. Whereas belonging to a family of wealthy individuals where her parents own companies, she is estimated to worth about $100 thousand in net worth.

Kylie Prew & JoJo Siwa: Dating, How Did They Meet?

By early 2021, Kylie Prew and JoJo Siwa have known each other for a year. In fact, they were best friends to start with. But, Kylie and JoJo added romantic feelings in their already close relationship starting from 8 January 2021.

On 8 February 2021, JoJo wrote a post where she captioned,

“After being my best friend for over a year, January 8th 2021 I got to start calling this exceptional human my Girlfriend… and Since then I’ve been the happiest I have ever been! She seriously is the most loving, supportive, happiest, protective, and just the most beautiful perfect person in the world. And I get to call her mine! Happy one month to my girl! I love you more and more everyday!❤️”

The post explained the unbound happiness JoJo felt regarding their relationship. Whereas, Kylie also celebrated their anniversary with a post that read,

“fall in love with your best friend, guys. it’s THE BEST feeling in the entire world. here’s to one month with my favorite human 🙂 i love you sharky ♡”

This confirmation of the relationship came right after JoJo came out. First, she left a hint of being gay by appearing on a TikTok to Lady Gaga’s LGBTQ anthem, Born This Way. But on 22 Jan 2021, one of her cousins posted a photo of a T-Shirt that read,

Moreover, Jojo revealed it was Kylie Prew who encouraged her to reveal her true self.