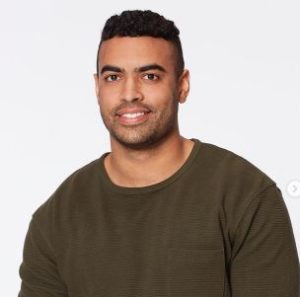 Season 2021 Bachelorette had Baltimore, Maryland’s very own Justin Glaze. He is artistic, career-driven, and sets high standards in romance. So, he is quite a catch if you got to say it loud.

Learn more about the contestant’s details on parents, career, net worth, and ideal partner in this Justin Glaze Wiki.

Justin Glaze was on Bachelorette season 2021, where the center of attraction was Katie Thurston. Though she proved that she was no ordinary bachelorette but Justin appeared to be the type to meet her fire. She even took the liking to his artistic talent that left her in awe.

According to Reality Steve, Justin made the final 4. Even better, he was the season’s runner-up, only losing out to Blake Moynes whom Katie picked. She would ultimately accept Blake’s proposal. Katie broke up with him after her fantasy suite with Justin.

Justin Glaze turned 27 years old in 2021. He receives birthday wishes from his friends and family on 13 June every year. Furthermore, he secured Gemini as her zodiac sign.

Justin Glaze was born to his father Mark G Glaze and his mother Deborah Glaze in his hometown of Baltimore, Maryland, the United States.

Furthermore, his paternal grandfather, Mark’s father, was Jackson Gusveller Glaze who founded a medical laboratory that primarily served the African-American community. Moreover, Jackson graduated from Lincoln University where he earned a BS degree in biology. His resume also added a military career where he served in Korean War as an army.

Jackson was awarded the church’s Black Hero Award in 1994 and the Mother Mary Lange Service Award in 2001.

Mark Glaze, Justin’s father, was one of the five kids born to Mr. Jackson Glaze. Whereas, no details on the career of both Mark and Deborah. However, they stayed married for over 30 years which inspired Justin of his high standards when it comes to having a romance.

More on his family: Justin Glaze has a brother named Alexander ‘Alex’ Glaze. Alex is a Twoson University graduate who worked with Sinclair Broadcast Group, followed by TEGNA, working as a Sports Anchor/Reporter.

The Glaze siblings shared a part African-American ethnicity on his father’s side whereas his mother’s ancestry is yet to be discovered.

According to the UMBC Retrievers profile, Justin Glaze stands tall at a height of 6 feet 2 inches (1.87 meters). Whereas, she weighed about 81 kilograms (180 lbs).

Now moving to the man’s social media reach, Justin Glaze is on all of the highly used social media platforms. His Instagram account earned total followers of 68.8k as of Aug 2021. On the platform, he posted 674 times.

Furthermore, Justin could also be discovered on Twitter with 3.3k followers in total where he has 10.5k tweets. Moreover, he is also on Facebook with the least bit of activity among all the other platforms.

In July 2013, Justin began receiving backlash after the resurfacing of homophobic and racist tweets from his past. The tweets in question belittled Black women. He also used a homophobic slur. Justin later apologized for the tweets and asked the Bachelor fandom not to defend him.

Justin Glaze sits in a burgeoning net worth of around $150 thousand.

Starting with Justin’s education, he attended Mount Hebron High School where he helped the school win its second Howard County championship as a freshman as a Track & Field athlete. Justin also lettered in football and basketball for the Vikings. He was on a four-year honor roll during his high school and received the state Minds in Motion Award.

Following high school graduation, Justin enrolled at the University of Marland Baltimore County. There he studied Business Technology Administration, Economics Concentration, and minored in Visual Arts. He graduated in 2016.

Talking about professional life, Justin was in T. Rowe Price as an account management intern. After three months of internship, he joined Morgan Stanley as derivative operations summer analyst.

Then, Justin returned to T. Rowe Price as a financial services associate in October of 2016. He ranked up to become the US Intermediary Sales Associate. This is followed by DCIO Intermediary Sales Consultant since January of 2020.

Apart from Justin’s job, he was also NCAA D1 Varsity Student-Athlete. While in UMBC, he set various records such as placing seventh in the long jump and 15th in the triple jump at the 2014 America East Indoor Track and Field Championships in New York. He also recorded his best long jump of the year, 6.76m (22’2.25”) while finishing fourth in the event at the 2014 Big Dawg Invitational at UMBC Stadium.

In 2016 Outdoor, Justin competed in the long jump and javelin during the outdoor season. He earned a sixth-place finish in the long jump at the America East Championships with a jump of 6.61m. His best javelin toss also came at the conference meet with a throw of 46.69m.

Outside of his athletic ability, Justin is also quite an impressive artist who showcases his works on his Instagram.

Having been raised by parents who have a successful marriage that lasted over three decades, Justin clearly sought commitment and loyalty. He was looking for someone beautiful both inside and outside, trustworthy and committed to the idea of teamwork in a relationship.

Fitness is a must for him, so Justin wishes his ideal partner to be more passionate about it and stay healthy together. She should also love a day barbecuing and a good bottle of Sauvignon Blanc. He believes in emotional and physical attachment, and these are the traits of his ideal partner.