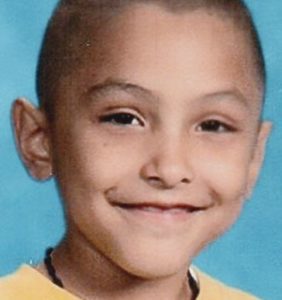 For the fans of the crime and thriller genre, the wait for the bone-chilling series was over as Netflix premiered its one of the most harrowing series under the genre of true crime named The Trials of Gabriel Fernandez.

The docuseries premiered on 26 February 2020 and left people in tears. But the most important thing was, it was a raw depiction of the failure of the same system built to protect Gabriel from his exploiters and abusers.

Delve into this wiki article of Late Gabriel Fernandez and take a closer look at what exactly went down.

Had Gabriel Fernandez survived the torture and cheated his death, he would’ve been 15 years old on 21st February 2020. He was born to Pearl Fernandez and Arnold Contreras in 2005.

Gabriel shared the roof he lived under with three other siblings, Virginia, Ezequiel, and Arnold E. Contreras.

His mother, Pearl, was known to be abusive. She was very abusive to her boyfriends and that included Contreras.

Whereas, Contreras was no saint either. He had a history of being incarcerated for various reasons. At the time of the death of Gabriel, he was held in the prison for robbery and possession of a firearm.

Before it all went south for Gabriel Fernandez, he was raised in a nurturing environment. 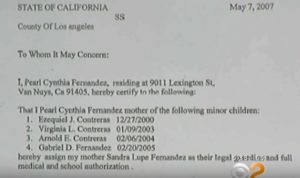 The document of relinquishing the right of Pearl Hernandez and the custody handed over to her mother Sandra Fernandez (Pic: Court on Crime YouTube)

Since the day Gabriel was born, he was raised and grew up around his Great-uncle Michael Lemos Carranza, and his partner David Martinez. Meanwhile, his siblings were living with his grandparents, Sandra, and Robert Fernandez.

Owing to the troubling nature of Pearl Fernandez, Gabriel’s grandparents won custody of him after four years of getting raised by Michael and David. He was raised in a loving environment.

Pearl’s negligence had no bounds. Her relative and neighbor accused her of ill-feeding both of her children and the car accident Ezequiel got injured in.

When Gabriel turned 7, Pearl — who initially claimed of having zero interest in raising Gabriel — fought for the custody of the boy. All of the relatives and Arnold Contreras, Gabriel’s father, had second thoughts on handing over the custody of Gabriel to Pearl.

But Gabriel’s nightmare started in 2012 when his mother got custody of him anyway. At the time, Pearl was dating a man named Isauro Aguirre.

Jennifer Garcia, Gabriel’s teacher, was the first who noticed the signs of Gabriel being abused. As the sign of abuse got worse, she reported it to L.A. County’s child abuse hotline several times. The caseworkers found no strong ground to strip off the custodian rights of Pearl Fernandez.

On the night of 22 May 2013, L.A. police officers got a 911 call from a woman who reported a child who fell and hit his head on the dresser, was not breathing. Soon after, the first responder Los Angeles F.D. paramedic, James Sharmack, came in the house to find little Gabriel out cold with several signs of physical torture. 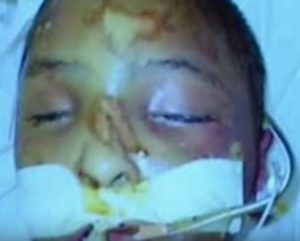 Gabriel Fernandez When Hospitalized on 24 May 2013 (Pic: Court On Crime)

He was rushed to the hospital following the commotion and was declared brain dead.

After a full body examination done thoroughly, reports of the test came in where he was found with broken ribs, a fractured skull, several bruises and burns, and BB gun pellets in his body.

He was taken off of the life support on 24 May 2013 when he breathed his last.

Gabriel’s imprisoned father Arnold was broken by the devastating news following his death. Arnold was denied the opportunity to see the body of his dead son in the hospital.

The case was filed against Pearl and Aguirre, where Contreras, Gabriel’s siblings, and few other relatives testified against the two.

Off all the testimonies put forth, Virginia and Ezequiel revealed details too much harrowing even to imagine.

The siblings revealed that Pearl and Aguirre’s primary motive for the torture and murder was their homophobic nature. Gabriel was often exploited for his apparent feminine traits and called him “gay”.

Before he was brutally tortured to death, Gabriel was frequently smothered and bound and was left locked up inside the cubby to hide him.

As Ezequiel went on to unfolding the unthinkable, he said, they force-fed him rotten food, cat litter, and even his vomit. They used to put out cigarettes on his skin, whipped him with a belt buckle or baseball bat, and even shot him with a BB Gun. 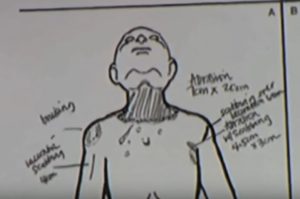 Body Chart of Gabriel presented in the court describing the torture he was inflicted (Pic: Court on Crime YouTube)

The abuse was substantial and it happened in 8 months period of Pearl getting custody of Gabriel.

The note he wrote before he died (Pic: Crime on Court)

Gabriel often wrote notes saying he would take his own life and the only thing he ever wanted was to be a good boy. A few days before his death, he wrote a card to Pearl writing down all the things he loved about her.

Discover – An Ode to Leonard Cohen

As the trial heated off, attorneys of both accused, Pearl and Aguirre, claimed defense for their clients. Fernandez was defended on a ground of mental illness and low IQ resulted from her history of abuse and assault.

Meanwhile, Aguirre’s attorney tried getting a get-by claiming of him having a learning difficulty. Several individuals who knew Aguirre were present on his trial. They displayed an expression of shock at the news of him torturing kids as they knew him to be a kind-hearted individual.

Both, Pearl and Aguirre, were found guilty of first-degree murder along with the indictment of four caseworkers.

Pearl Fernandez was sentenced to life without parole after her two eldest children and the witness of the whole horrendous crime, Virginia and Ezequiel, refused to testify against her. Whereas Isauro Aguirre was given the death penalty as jurors found him guilty of torturing Gabriel with an intention of murder.

As for the Caseworkers, they were fired for their negligence in handling the case of Gabriel.

In 2020, an appellate panel ruled that the indicted social workers should not face charges regarding the death of Gabriel Fernandez.