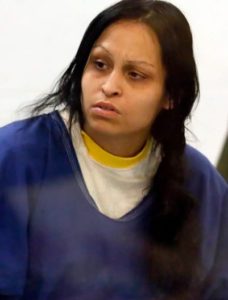 Upon the release of Netflix’s true-crime docuseries The Trials of Gabriel Fernandez on 26 February 2020, the 2013 Filicide case was brought to light for the wider audience.

Though all the people felt sorry for the brutally murdered Gabriel Fernandez, Pearl Fernandez, his mother left people pondering on the incomprehensible mindset leading to the unimaginable level of brutality for the common.

We’ve created the wiki-style bio of Pearl Fernandez and her troubled past which might help the readers connect the dots.

Pearl Sinthia Hernandez was born to Robert Fernandez and Sandra Fernandez on 29 August 1983. In 2019, she became 36 years of age.

Talking about her family, she spent her childhood with Robert, her father, nowhere to be found as he was in and out of prison all the time. The responsibility of Pearl fell on the lap of her mother, Sandra, who was not very fond of her.

Pearl got caught up in the habit of drinking when she was 9 whereas she started substance abuse by the age of 11.

Following the arrest, Pearl was interviewed by a clinical psychologist Deborah S. Meorah where she opened up about her past. There in the interview, she noted that she had only attended up to the eighth grade. Whereas her aptitude was of the second-grader. Also, she was remarked to be the one with zero control on her behavior and emotions.

Pearl was raised under the same circumstances she had put her children through. She was often abused and neglected and was sexually assaulted as a teenager.

When Pearl was 11, she ran away from her home.

Owing to Pearls abusive childhood, she was diagnosed with insufficient mental development, depression, mental disorder, and trauma and post-traumatic stress.

While Pearls neighbor accused her of being the abusive one oftentimes, she claimed of being in an abusive relationships.

Arnold Contreras and Isauro Aguirre are two of her publicly known boyfriends as of February 2020.

Arnold Contreras, father of Gabriel Hernandez, also had problems with the law. At the time of his son’s death, he was in prison facing time for robbery and gun possession.

Whereas, Isauro Aguirre was the one who tortured Gabriel to death. He was also the one accused of being one who made Pearl to seek custody of Gabriel in the first place.

As of February 2020, Pearl Hernandez was doing time in Chowchilla State Women’s Prison, Central California Women’s Facility, after being life-sentenced without parole. The sentence began on 21st June 2018 after the jury reached the verdict and found her guilty.

The trial began when she was arrested along with her boyfriend Aguirre after she called 911 to report an accident. When Gabriel was examined after the responder reached the crime scene, they concluded it was a murder, fabricated and reported as an accident.

Gabriel was taken to the hospital but was declared brain dead with burns, bruises and organ failure. The signs of torture terrified the whole response unit involved.

As for Aguirre, he was sentenced to death and is in Death Row at San Quentin after being convicted for first-degree intentional murder by torture.