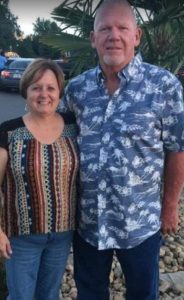 In March 2020, NBC’s Dateline is going to cover the case of a former South Carolina Police Officer murdering his wife. The episode premiered in March of 2020.

The episode will explore the homicide, the arduous investigation following the murder, murder cover-up, and the murder trial in 2019. This includes the interview with Judy Baldwin’s family, Chester County Coroner Terry Tinker, and Prosecutor Candice Bailey.

Delve into this wiki-style article to uncover the details on what went down in 2016.

James Baldwin or ‘Jamie’ is a South-Carolina native who also was a former police officer and a dispatcher.

In 2016, just a few days before Christmas, he killed his wife Judy Orr Baldwin and orchestrated the whole thing to make it look like an accident.

Initially, the police officers believed it to be true. But As the friends and families were later informed, they pressed the investigative officer to further investigate the case as a homicide.

James Baldwin and Judy Baldwin met each other and tied the knot, eight months after they met, in 2012. Judy was known to be “Giddy” with Baldwin.

Judy Orr Baldwin, a mother of two, was previously married to her departed husband Todd, who had died in a motorcycle accident.

The trial regarding the murder started in 2018.

South Carolina court Records showed he was arrested for arson and insurance fraud. But he was freed on bond for the same.

How Did James “Jamie” Baldwin Murder His Wife?

James Baldwin murdered his wife, Judy Orr Baldwin, beating her up to death.

But, he tried really hard to make it look like an accident. He plotted the incident and a story regarding that.

The testament was, he and his wife were going on a dark, rural road driving a jeep in Chester County, South Carolina. On 14 December 2016, She was staged as ejected from the vehicle while steering the vehicle to avoid a crash in Old Richburg Road. The jeep hit the embankment resulting in the ejecting of his wife from the vehicle.

He rushed her to the emergency room too and explained the same to the doctors.

But during the autopsy of Judy’s body, the injuries found on her body were not from the accident. The suspicious relative had found blood on a mantlepiece inside the house.

To which, James clarified it to be from the accident she had while decorating for Christmas.

Judy had three injuries inflicted on her head. There was a 9-inch (229-millimeter) skull fracture.

The inconsistency of the story with the incident had the investigators further delve into the details while James Baldwin was maintaining his innocence.

The coroner in Chester County concluded that the death of Judy Baldwin was caused by “blunt force trauma”.

The final trial started on 28 October 2019, almost 4 years after Judy’s death, at the Lancaster County Courthouse. The 2-hour trial concluded with a guilty verdict and convicting James for the murder of his wife.

James was incarcerated starting on 14 August 2018. His exact location has not been disclosed as of penning this article but he was within the vicinity of the South Carolina Department of Corrections. 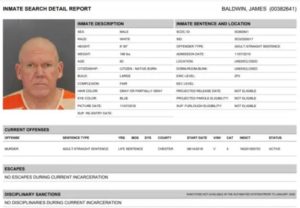 The prison record of James unfolds that, he had never made prison escape attempts. No disciplinary actions had to be taken during the time in prison.

From 10 March 2020, he has started the job of “WardKeeper Assistant.” The state DOC said to Fox Carolina, James will be assisting in diurnal operations of a housing unit.