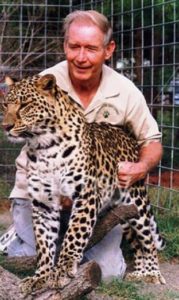 In Netflix’s newest offering in the genre of true-crime drama, Tiger King: Murder, Mayhem and Madness, the clash between two powerful forces was shown.

If we visualize the plot and try to picture the character development of both, it was nothing less than a well-written script for a feature film.

But, Carole Baskin, the arguable protagonist character, was able to do what she wanted to do with the help of a side character. And in this story, Don Lewis, her second-husband played that part.

After a mysterious disappearance, his story had surprised and intrigued Carole Baskin, Don’s family from a previous marriage and the viewers of Netflix’s new documentary.

So, we’ve crafted this wiki-style article which might shed light on the mysterious man and news on his disappearance, so scroll down.

Allegedly, Don and his two anonymous siblings were raised by his single mother who was a seamstress by trade. Due to the financial instability, he had worked on the farm and also was briefly engaged in mechanical work.

In 1955, he graduated from Pasco High School.

He was doing pretty well with his business of selling and scrapping metals. He was making a decent six-figure income doing that and had owned two different real estate properties.

The burgeoning net worth was aided after the arrival of Carole Baskin in his life, and before he had disappeared he was worth almost $5 million.

Before Don’s path crossed with young Carole Baskin, he was already married to a different lady named Gladys Cross.

He met Gladys, his first wife, in high school while he was working as a bag guy in a store. Then in-love couple fell for each other and got married after being together for 2 years.

At the time of sharing the vows, Don was 17 whereas his wife was 14 years of age.

The married-couple had four children out of the marriage. Donna Pettis, their firstborn was a sibling to Lynda Sanchez, Gale Rathbone, and the lesser-known adopted son.

The night when Carole was escaping from Mike Murdock’s, her first husband, tirade and exploitation, a stranger offered her help who happened to be none other than Don. At the time Carole was 19 whereas Don was 42 years old.

At first, Don changed his name to Bob Martin and introduced himself to Carole. They talked about each other, details regarding their life.

Later that night, due to a phone call, now animal rights activist Carole discovered he was Don Lewis, a wealthy businessman.

The pair spent a platonic night together at a motel nearby. As they kept sharing things, the affair between the two ignited.

The love birds tied knots in a courthouse ceremony in 1991. As for his first marriage, Don and his previous wife discussed divorce in 1989 and it was settled in 1990.

Carole got the courage to pursue her passion for protecting animals through the support her husband demonstrated for years.

In an auction, he had won the bid against a competitor for Windsong, a bobcat. Later he bought her 56 bobcat kittens to protect from being stuffed for fur from Minnesota.

Around the same time, the couple was working together buying and selling undervalued real estates.

The millions the married couple had made, helped them finance for purchasing a 40-acre property on Easy Streets, which eventually would be turned into a sanctuary for big cats. It was named Big Cats Rescue.

Both Don and Lewis expanded the enterprise and made it a heaven for lovers of animals catering an added bed-and-breakfast service. The place attracted a lot of local visitors as well as out of state.

Both the enterprise and relationship was flourishing until Don proposed to take Big Cat Rescue into a different route, business-wise.

Rather than keeping it as a service-oriented venture, he wanted to breed animals privately and sell it to finance the maintenance of the sanctuary and pocket the profit that remains.

Carole was strictly against the proposition.

Two had frequent arguments regarding the issue and one day, Don just disappeared to never return. The disagreement had peaked it’s highest before the disappearance that Don got a restraining order against Carole.

Don was reported to be missing in August of 1997.

In the Joe Exotic Trial, Carole remarked that her husband left her saying he was going to Miami. The van he drove, was found near the airport but there were no records of him boarding the plane. 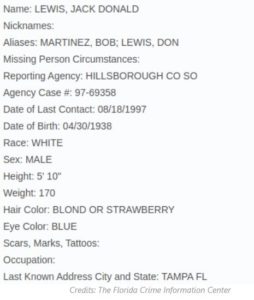 Don’s daughters from his first marriage testified that Carole is guilty of the disappearances of their father. That, she got rid of him to take over everything he had. One of his daughters accused Carole of murdering Don and feeding him to her big cats.

But jurors found no ground on supporting all the allegations made. She was not kept as the suspect.

Legally, Don was declared dead in 2002 following his missing for almost five years. But the authorities kept his search to know his whereabouts.

After the premiere of Joe Exotic and Carole Baskin’s infamous feud, Carole addressed the missing of Don on her Big Cat Rescue website.

She revealed, both Don’s physical and mental health was deteriorating before he disappeared. Anne McQueen, his secretary had advised Carole to let him see her psychiatrist.

The doctor had referred him to another physician.

The physician diagnosed him with bipolar disorder and prescribed him for an MRI check. She suspected a foul play in the scenario.

Both opposing parties of the case blamed each other for being greedy and were rooting to get the ownership and conservatorship of the estate.

Carole accused her employees of duping Don out thousands of dollars taking advantage of his inability to read and his degrading mental health.

In the show, Netflix showed a giant meat grinder. But Carole turned down the ownership of the grinder. Many viewers of the series suspected Carole of killing her husband don in that grinder. Some even entertained the idea to do a DNA test.

Also, multiple theories popped up regarding the mysterious disappearance of Don such as his involvement with other women, drug dealing, a trip abroad and many other entertainable.