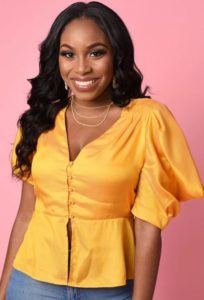 Imagine someone setting you up for a blind date. Yes! the excitement is there to meet someone new, but here is the catch. You can’t see them and the conversation will be limited to vocal interaction. Sounds crazy enough?

Now for the icing, even if you like the person and his ideas and whatever you’ve felt based off of the adequate amount of auditory dating, you can only see the other person after you’re engaged to him.

And now, for the cherry on the top, you have to pretend you’re not married to the guy for over 1 year.

Yes! like all our readers we can’t imagine going through all of that.

But Lauren Speed from Netflix’s Love Is Blind (2020) did it all. The premise was made clear to her and even after that she boldly went through it all and became happily married to Cameron Hamilton, fellow cast and now-husband, from the show.

Welcome to the wiki-style article based on Netflix’s beloved star Lauren Speed. Delve into it, as it unfolds details on her life.

How Old Is She? Wiki, Family, Birthday

She is Atlanta, Georgia-native born to her mother whose details are scarce to find and her father Bill Speed, editor, producer, and also the creator of BET’s Video Soul. She proudly hails an African-American ethnicity.

Her brother, Nicholas Speed, is a rapper/producer representing the Detroit hip hop scene.

After finishing high school, Lauren attended Eastern Michigan University where she earned her Bachelor’s degree in Electronic Media and Film.

Like her husband Cameron Hamilton, she draws all the inspiration from her family to pursue love and life.

Interesting Reads: Netflix’s The Trial of Gabriel Fernandez and everything about it.

Being daughter of Bill Speed who was already over 40 years in and knee-deep in Radio, Television, and Print, it wasn’t hard for Lauren Speed to find a feasible career path.

Before her breakthrough career on Netflix’s hit show, Lauren had already established herself as an actress, model, radio host and several more. Going through her resume, fans can tell she is a multi-talented personality.

Lauren started in the entertainment industry as a radio host in her days as a college student. Following that, she was hosting a podcast titled Real Talk Live.

Besides being a talk-show talent, Lauren’s modeling gig garnered her diverse opportunities to explore.

Lauren — with a height of 5 feet 10 inches (1.7 meters) — was featured in several local, national and international magazines. She also appeared on several music videos.

Also, Lauren did ramp walk during multiple fashion shows at a local level. In addition to that, she modeled for sweetgloss.com, a makeup artist best known for working with Alicia Keys.

More on that, Lauren equally shined on the field as a director and producer while pursuing a film making career.

As per her LinkedIn page, Lauren holds the position of CEO/Owner of The Speed Brand LLC. She also had a job of Media coordinator City of Hazel Park where she worked for 1 year approximately.

Love Is Blind, Net Worth Info

When casting director from the show was headhunting the talent, they came across Lauren Speed. In a brief conversation they had, she was familiarized with the premise of the show.

Though she was skeptical about the concept, she was very open about taking on the challenge.

When Lauren and several other female participants were taken to the shooting location, she noted the setting to be like a Sorority home.

But, Lauren and Cameron Hamilton heated off like none others did. From the first date, they were into each other.

With Lauren multi-faceted talent and personality, Cameron couldn’t help but fall for her. The couple got engaged and tied the knot in 2018.

With the multiple ventures, she had already started on, pointers on the net worth chart is expected to rise upwards. With her success in Love is Blind, she is on her way to closing the gaps between her current net worth with her first $1 million-dollar.

In March 2020, Lauren — together with husband Cameron Hamilton — launched a YouTube channel titled “Hangin’ with the Hamiltons.” Through it, the pair admittedly planned to explore their marriage, friendships, family life and traveling.

When Lauren Speed saw Cameron Hamilton for the first time after being engaged, the first word that came to her mind was ‘Prince Charming.’

The married couple tied the knot on the show in 2018. It was a beautiful wedding in a beautiful setting, where she and her now-husband Cameron Hamilton shared vows with their nearest and dearest ones. 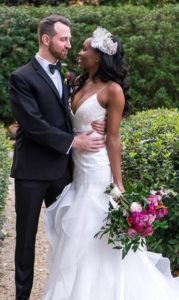 In the ceremony, Lauren was looking gorgeous in her shoulder strapped white mermaid dress with a flower-like head-piece that amplified her black beauty whereas Cameron donned a black suit with a bow tie.

The married duo kept the event a secret until 26 February 2020 when the finale episode aired on Netflix. But, several fans being a typical one, the lover of the reality show was looking for the easter eggs on their social media handles.

Not every celebrity marriage manages to be as intriguing as this couple did. And one and half years into their marriage, they still had good things on their way.

As of March 2020, the fans of the show were yet to hear Lauren being pregnant and baby news and a possible spin-off involving her and Cameron.

More From Us: Sera Johnston Bio- All About Timothy Hutton’s Accuser