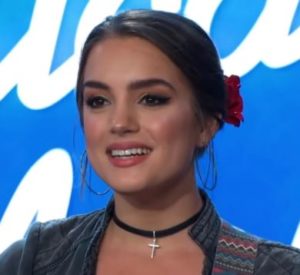 Lauren Mascitti is a singer/songwriter who participated in the American Idol season 18.

The fans were disappointed as she brought her renowned boyfriend, Shawn Camp for the audition. Though Shawn didn’t have a major role in the song she chose, she might have wanted to ride the wave that Shawn was surfing on.

On top of her beauty, Lauren also has a beautiful soul. She worked as a nurse and got inspirations to write songs through it. She aspires to help and inspire people through her music too.

Lauren brought her mix of country/gospel to the show and had already made it among the top 21 contestants.

Learn more about Lauren’s wiki as the article unravels.

Like most of the other co-contestants, Lauren grew up singing in the church. She recalled getting her first singing lesson at the age of seven. It was from a lady she admired at their church’s choir group.

Furthermore, she even recorded her first album at the age of seven. Her straightforward storyteller character comes from her Sagittarius zodiac.

Lauren Mascitti was born in Canton, Ohio where she lived with her family and siblings. Later, she was adopted by her grandparents and moved to Branson, Mo.

At the age of 12, the American Idol hopeful used to perform alongside the former members of Oak Ridge Boys. She wanted to pursue her career in music and asked her grandparents to move to the city.

Agreeing to her demand, Lauren’s grandparents asked her to get a degree first. So, she enrolled herself to be a registered nurse and after graduation, they moved to Nashville.

Lauren was often compared to the American singer Linda Ronstadt. The similarity in their voice and song choices was identical.

As a performing artist, Lauren likes to keep herself fit and refreshed. She worked out to maintain her 54 kg (119.05 lbs) weight. To mention her other distinct body features, she has appealing dark eyes and a beautiful smile.

Lauren is among the few American Idol contestants who preferred to perform original songs in the show. For her audition, she sang her original If I Can Lose You alongside her boyfriend.

Moving to Hollywood round, she was placed in the country category of the genre challenge. She dueted with Leon Majcen on the song Jackson by Johnny Cash and June Carter Cash. And for her solo round, she sang another one of her originals God Made a Woman.

For the Hawaiian round, it was her take on Two More Bottles of Wine by Emmylou Harris that moved her to the top 21. For the final spot in the top 20, she and fellow contestant Grace Leer fought for votes from the fans. Sadly, Lauren lost and got eliminated.

Lauren Mascitti’s net worth was estimated to be $150 thousand as of early 2020.

After moving to Nashville, Lauren Mascitti stumbled upon her fiancee Shawn Camp as she was paving her dream. Since Shawn was a singer/ songwriter too, they began writing songs together and the rest is history. 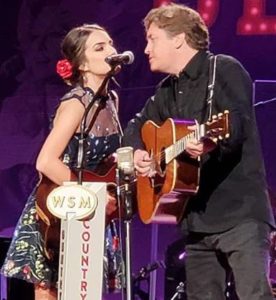 Shawn has worked with stars like Garth Brooks, Brooks & DunnRodney Crowell and may more. For her part, Lauren seemed proud of her fiancee as she kept going on and on about his achievements in the auditions.

By 2020, Lauren and husband prospect Shawan were engaged for over a year. Moreover, the duo was deeply in love and had plans to get married soon.