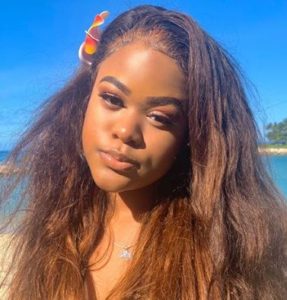 Born to a family of singers, Cyniah Elise stunned the judges as she auditioned for the American Idol Season 18. The judges handed her the golden ticket to Hollywood as she sang her take on ‘You are the reason’ by Calum Scott.

After the selection, more than 20 members of her family rushed in to audition to cheer along. To which, Lionel funnily demanded that all her family should appear on upcoming auditions but ‘one by one’.

Cyniah first came to the limelight as her cover of Change Me went viral on social media. The video was taken at 2017 thanksgiving and had amassed over 4 million views on Facebook. Since then, she was encouraged by her fans and family to appear on the show.

Learn more about Cyniah Elise’s wiki as the article continues.

Cyniah Elise was 18 years old when she appeared for the American Idol 2020. Apart from this, she is greeted for her birthday every February 27th.

Growing up in Atlanta, Georgia, Cyniah was a fan of the American Idol from the age of 6. She grew up singing in the church with her family, it was where she got the chance to refine her voice.

Born under Pisces zodiac, Cyniah was observant and compassionate from an early age.

Her mother was the choir director at the Cornerstone Baptist Church. She guided Cyniah with her singing. Thankful for her mother, Cyniah also uploaded a picture along with her on Mother’s Day.

Apart from singing, Cyniah first laid her fingers on the piano at the age of 3. She began performing on various events since then and was also a part of the children’s choir.

Idolizing Beyoncé and  Jennifer Hudson, Cyniah Elsie aspires to spread her gift for the whole world to listen.

Cyniah was on the way to lose some weight as her Idol journey continued. She weighed about 66 kgs (145.5 lbs) then.

To mention her other distinct body features, she has naturally wavy hair, beautiful dark eyes, and a perfect nose.

She uploaded her videos of cover songs on her Youtube channel @Cyniah Elise, which had 3.75K subscribers.

After Cyniah Elise went to Hollywood, she was placed in the R&B category in the Genre Challenge with Just Sam, Makayla Phillips and, Jordan Jones. For the round, Cyniah dueted with Makayla Phillips to perform The Prayer by Celine Dion and Andrea Bocelli.

Later, she blew away the judges with a cover of I Wanna Dance with Somebody by Whitney Houston for her solo performance. She knew she had made it to the round when she was kept in the same room as Arthur Gunn, Kimmy Gabriela and, Jonny West.

For her Hawaiian week, Cyniah came out with an attitude as she sang ‘First time high’ by Rita Ora.

From the confines of her living room, Cyniah gave a stellar Top 20 performance. In the round, she beautifully sang Demi Lovato’s ‘Warrior.’

Cyniah’s net worth was estimated to be around $60 thousand before 2020.

Engaged in the preparation for her American Idol Journey, Cyniah Elise had very little time for dating.

Furthermore, Cyniah seemed to enjoy spending time with her co-contestants for the Idol. It put fans to wonder if she would take a boyfriend form anyone of them.

Cyniah remained silent about her previous dating history and had her own belief for an ideal boyfriend.

American Idol Change Me You are the reason