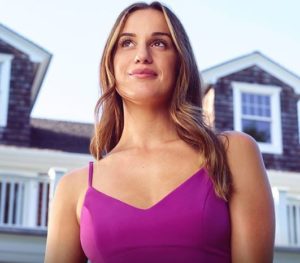 Hannah Berner is mostly known for her reality TV features and social media presence. As per her profession, she worked as an on-air personality at NBCUniversal Media, LLC based in Greater New York City Area.

All along, Hannah successfully ran a podcast titled Burning Hell which entailed interviewing comedians, reality stars, and influencers. Before all this, she already amassed an incredible set of experiences of working as— creative video producer, sports and fitness model, video production assistant, digital marketing manager/executive, reporter, and social media manager.

Below, in the writing, let’s get to know her thoroughly — her wiki(bio), family, siblings as well as marital status.

Hannah Berner —  who turned age 29 in 2020 — grew up celebrating her birthday every year on 12th August.

Talking about her education, she went to Poly Prep Country Day School and The Beacon School before getting a Bachelor of Arts from the University of Wisconsin-Madison. Furthermore, Hannah graduated from the place with a Major in Communication Arts and Rhetoric and Certificate in Gender and Women’s Studies. Moreover, she was a competing tennis player during her youthful days; she continued to play professionally as well for the University of Wisconsin.

Hannah Berner was born to her parents: Lenore DiLeo-Berner (mother) and Dan Berner (father). A native of Brooklyn, New York, Dan is a graduate of Lubin School of Business. Meanwhile, Lenore is a Retired Principal of MS51 BK. A jazz singer, Lenore attended Cornell University and Columbia University Teachers College.

For siblings, Hannah has a brother named Daniel Berner. Also, Vera DiLeo is her maternal grandmother.

Hannah Berner was born in Brooklyn, New York, the United States. Growing up, she also spent a lot of time on Shelter Island. There, she lived to some very good years of her adolescence with her family.

The best advice Hannah ever received was from her father who shared with her a Jewish proverb — “one should not ask for a lighter burden but the broader shoulders.” Ever since then, the saying became Hannah’s life motto.

Hannah Berner stands at a height of 5 feet 7 inches and the weight, meanwhile, was not so far known. Also, the reality TV beauty was yet to confess her aww-deserving measurements.

She seemed keen on maintaining her health. Every night she made sure to get her beauty sleep. Plus, Hannah avoided coffee at all costs and preferred spinach, banana, and mango smoothie as her go-to breakfast. All of this, in addition to some yoga and gym, was incorporated in her every other individual day.

Hannah Berner reportedly owned a net worth of $450 thousand.

Meanwhile, as per the International Business Times, her estimated salary from the jobs other than the Summer House was said to be $100K/year.

Hannah starred in the American reality television series, Summer House for its third season, circa, March 2019. Airing on Bravo, the show follows a group of nine friends who share a summer house in Montauk.

The makers renewed the show for the fourth time in February 2020, and Hannah along with her other co-stars rejoined the new cast members, twice for the same venture.

Here is a list of Hannah Berner’s present and former boyfriends:

As soon as the Summer House kicked off its fourth part, Hannah Berner was seen flirting with the new house guest, Luke Gulbranson.

Hannah — who was also seeing another guy named Armand — did not confirm dating the rumors. Luke, meanwhile, admitted that they were “very close”. Also, she could not but openly praise Luke’s confidence and good looks. 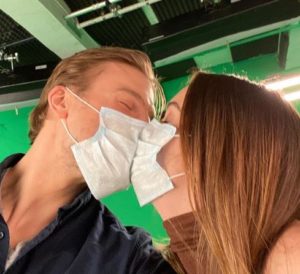 But then, Hannah also jokingly hinted that she might just be single at the moment. Her words were— “There’s just so many different people that I wanna experience and learn from in this life… Involving penises.”

Also, the fact that Hannah had a seemingly short-lived fling with her British boyfriend Dave, during the first season of the show, can not be missed.

According to Hannah, she and Des meet at a comedy club around 2015. The duo connected after Des DM’d her. Admittedly, her new boyfriend was teaching Hannah new things. To everyone’s delight, Hannah went on to rave about the amazing sex she and Des were enjoying.

Opening about her experience with her new boyfriend Des, Hannah shared—  “Dating [Bishop] is great because he’s had like his career already. He jokes he’s like, I want you to be my sugar mama. And I’ll like golf and hang in the hot tub. He’s like, I’ll take care of the kids. I’m like, yes, that’s what I want. So I love the idea of dating an older guy who was like, wiser than me in a lot of ways and has lived a lot of things that I haven’t lived.”

She then added— “I don’t feel like I have to be a project manager and like fix him in a lot of ways. And yeah, you just have to find a guy who’s confident within himself. And then you feel like you can still be your psycho-competitive self.”