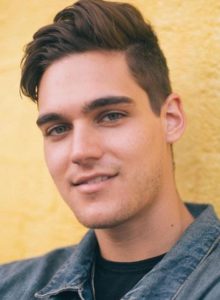 American Idol season 18 wasn’t the first introduction of Nick Merico to all three of the judges. In 2019, he made it through the audition round, impressed judges, and took away the ‘golden ticket to Hollywood’ but bailed on the show.

Judges, not knowing what to make of it, listened to him but shot some harsh comments at him. But the point of it all the way long was to make him understand not everybody should like him.

All the judges felt that he definitely needed to let go off his ego and it probably was what got him to the top 21.

This wiki-article attempts to bring you the info related to the life of Nick Merico along with his dating status and career pursuit, so scroll down.

Nick Merico was born on 29 December 1995 in St. Louis, Missouri. He turned 24 years old while celebrating his birthday in 2019. As per his birthday, Nick is a Capricorn by zodiac sign.

Nicolas Merico AKA Nick Merico was born to Fredy Merico, a co-founder of a logistics company named Nexo Miami and her mother Cheryl Merico, the Chief Financial Officer on the same.

Furthermore, he also had an older sister named Alexa Merico who is a photographer. All of his family members were very supportive of him following his dreams to be an entertainer.

In the audition round, Nick Merico sang his cover of You Say by Lauren Daigle. Despite his attitude beforehand, his performance was much appreciated which got him a ‘golden ticket to Hollywood’ again.

On the Hollywood week round 1, he sang I Love You More Than You’ll Ever Know. The performance helped change the impression of him that the judges had.

Following that, in round 2, he and Jimmy Levy sang Someone You Loved by Lewis Capaldi. Both contestants were found eligible for the round 3 because of the distinct sound and blend they found in the performance.

Round 3 of Hollywood week had the most devastating show of them all. Everyone performed, but only a few were able to impress judges. And fortunately, Nick made it on that list too.

In the Hawaii week, Nick was able to wow judges with his cover of When I Was Your Man by Bruno Mars. Lionel, who hated his guts at first, had pretty good things to say about him along with other judges. With that, he made it to the top 21 of Amerian Idol.

For the Top 20 round, Nick gave a stripped-down version of Plain White-T’s timeless song “Hey There Delilah.” Later, Katy Perry labeled the performance as one of his best.

Besides music, Nick Merico had one hell of a run as an actor. He started his career as a child actor playing a small part of 13-year-old-boy in the TV series Charlie’s Angels (2011).

But as of April 2020, he is best known for portraying Daniel Miller in the TV series Every Witch Way (2014-2015).  With his income flowing from music and shows, Nick is estimated to worth about $350 thousand.

Besides that, he has big eyebrows and narrow eyes along with other physical traits making him look like a model.

Now for the social media reach, Nick Merico easily had to be the one with the most followers amongst his American Idol peers in any platform. His long started acting career, helped him gain followers in all of the social networking sites he uses.

As of the time when this article was penned, Nick Merico had 237k followers on Instagram alone. Along with that, his Twitter accounts boasted 61.3k followers.

Nick Merico has a long list of women who dated him till the date.

But to make it short, we tried focusing on the ones that caught the public attention. In 2011, Nick was rumored to be dating a beautiful actress Andrea Chang. In a tweet, he referred to her ‘girlfriend’ via tweet. But, by the end of 2012, the dating rumor settled on its own backed by Nick talking about finding a girlfriend.

Within a couple of months in, Nick’s name came attached to Paula Koalla. Like Andrea, he also referred to her as his girlfriend on Twitter.

He further got muddled in a dating rumor with American singer Kira Kosarin in 2014. Following that he and Paola Andino, a fellow Every Witch Way star, was spotted at Katsuya having dinner. But later they confirmed it was not dating.

As of April 2020, Nick was single as his newest relationship hadn’t made a headline. With all these wife prospects he had, the American Idol hopeful was not the one to be counted as gay.