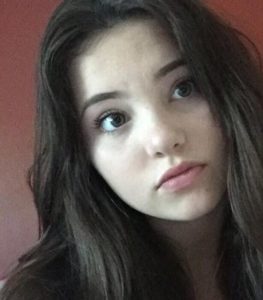 After 2019’s viral success, a desire to prove that Lauren Spencer-Smith was not just some viral singer planted in her heart. And what stage there existed to prove that than the American Idol?

So, to show her talent again to the world, Lauren competed in the season 18 of American Idol. And anybody could tell, she has gotten even better than before.

This wiki-style article based on the life of power-house singer Lauren Spencer-Smith acts as a guide into life and career along with the dating status.

Lauren Spencer-Smith was born on 28 September 2003 in Portsmouth, England. Moreover, she turned 16 years old while celebrating her birthday in 2019.

According to her birthday, Lauren is a Libra and owned a Canadian nationality.

Lauren Spencer-Smith was born to her father Gary Spencer-Smith and her lesser-known mother. However, her mom came in the Hollywood round to support her.

Her dad was the former weapon engineer at Royal Navy. Following that, he got into real estate and founded Rental House Profits. As of 2020, her father was in a relationship with Kryssie Thompson. Furthermore, they had been together for at least 6 years.

Lauren Spencer-Smith stands at a height of 5 feet 5 inches (1.65 meters) with a bodyweight of approximately 53 kilograms (116 lbs).

As for distinct features, she has a long hair to which she styles as a ponytail and has a cute round face with dimples on her cheeks.

Being the contestant of American Idol was the second time Lauren Spencer-Smith’s name caused the stir in the global entertainment media. Before the TV show audition, she had already gone viral in 2019 for her cover of Always Remember Us This Way.

The video was taken inside her father’s van as they drove while she was singing. The video amassed over 31.9 million views on Facebook. Since then, she was known for her cover songs of several major artists like Amy Winehouse, Pink, Jessie J, and several more.

Besides American Idol, Lauren had also shared the stage with Keith Urban when she was called out on stage from the crowd to sing with him. At the time she was only 11.

As of 2020, she had released two unplugged live albums. Other than music, the American Idol hopeful had worked as a waitress at Smitty’s Pancake house. After a brief period working there, she started working as a hostess at Boston Pizza.

All in all, Lauren Spencer-Smith’s net worth surpassed the $300 thousand mark.

And then her arrival on the world’s prestigious singing competition show The American idol shook her already existing fan base.

In her audition, Lauren Spencer-Smith sang What About Us by Pink, and judges couldn’t be more impressed. Being the youngest contestant on the history of the show, she received praise for her talent and a ‘golden ticket to Hollywood.’

On the Hollywood week first round, the talented singer flawlessly sang Kelly Clarkson’s Because Of You. While in the second round, she teamed up with Makayla Brownlee. Both singers made it through to the third round singing Set Fire To The Rain by Adele.

In the solo round, Hollywood week 3, The Joke by Brandy Carlile was performed by the viral singer. While other contestants were slacking behind by the end of the third round, Lauren went on to perform better and better with each round.

In the Hawaii round, Lauren sang Respect by Aretha Franklin. The power-packed performance easily got her a spot in the Top 20 contestants.

Performing from home, Lauren then sang Jesse J’s “Momma Knows Best” during the Top 20 round. All three judges noted that she was improving with each performance.

As for the social media reach, Lauren Spencer-Smith had garnered a total of 139k followers on her Instagram account (27th April 2020). Likewise, her Facebook page had over 418k followers as of the time when this article was penned.

As of Spring 2020, Lauren Spencer Smith hadn’t spoken about being in a relationship. None of her social media accounts hinted towards her possible boyfriends.

Indeed, she was very private regarding revealing her details. And because of that, unearthing relationship status was quite a challenge when it came to her.

American Idol Because Of You Gary Spencer-Smith Kryssie Thompson