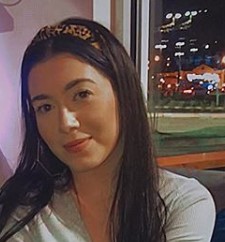 Every place’s got its values and flavors. To present it in one’s work is the real deal for any artist. Faith Becnel, an auditioner for the American Idol, which has its 18th season running, did it and got the golden ticket to Hollywood as she brought Louisiana flavor to her singing.

Stick till the end of the article to have a clear picture of who Faith Becnel is, about her American Idol journey, her dating status, and everything in between.

Faith Becnel was born in Kenner, Louisiana, the United States. In the Spring of 2020, she turned 21 years of age. Moreover,  Faith celebrated her birthday on 24th May.

Moreover, Faith was raised in a musical background from an early age by her parents. She spent her formative years in Destrehan, a few miles away from New Orleans.

Growing up, as she said, Faith listened mainly to classics and sometimes maybe pop and rhythm and blues. She had the biggest influences from artists like Aretha Franklin, Etta James, Stevie Wonder, and Amy Winehouse, which is pretty much apparent in her singing.

Faith is very close to her family, especially her mother, Diana. Along with her mother and her younger sister, Aubrey, she even went to spend her holidays last year.

Faith Becnel was fascinated by music from an early age and she used to sing in front of her friends and family whenever she had the chance to. However, her first stage performance came when she was 10 years old — she performed from the band The Rowdy Rough Boys and a Girl at events all over Lousiana.

Two years later, Faith had her first CD recorded and then started her band Faith Becnel and the Music Krewe, a year later.

With the band, Faith performed classics at weddings and other events, and she continues doing that. Moreover, she performed also at grand events like French Quarter Fest, Louisiana Crawfish Fest, Oyster Fest, Andouille Fest, Redfish Fest.

What remains still to being shed light upon is her net worth as there is no news, whatsoever, about the net worth she accumulated doing all the musical events and gigs.

Faith had already realized that she had the musical prowess needed to succeed in a music talent show. All she needed was a little confidence, and could it come at any perfect time than this? Laine Hardy, a Louisiana native, won the last year’s coveted title of American Idol — and that was enough for the Lousiana girl. 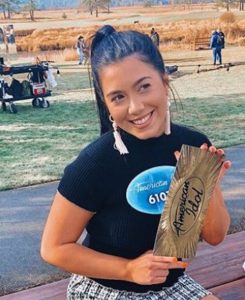 Faith Becnel with her golden ticket to Hollywood in an after-audition photoshoot.

Faith Becnel already got in the top ’40s of American Idol, a fact that the fans learned in an episode that was aired on March 8 at 8 pm on ABC. With the height, she achieved in singing during all these years, she can only be seen soaring high and high from here on.

Singing “It’s A Man’s Man’s Man’s World” and “Cry Baby” during the Hollywood Week, Faith advanced to the next round. While in Hawaii, she performed Chaka & Rufus Khan’s “Ain’t Nobody” and made it to the Top 20.

Eyeing a spot in the Top 20, Faith gave it all as she sang Bishop Briggs’ smash single “River.” Unsurprisingly, Lionel, Katy, and Bryan dug her performance.

Faith Becnel, with her tight schedules going on with all the musical events and covers, must have found it hard to take time for dating.

As of 2020, Faith’s social handles do not offer a single revelation on her relationship. That’s why it is very difficult to say whether she was single or she had a boyfriend.

That being said — since her popularity reached bigger than ever with her selection in the top ’40s of recent American Idol season — it is only a matter of time before info on dating and relationships starts leaking out.

Tomeeka Robyn Bracy married legendary singer Stevie Wonder in 2017 and only after that she gained wider...