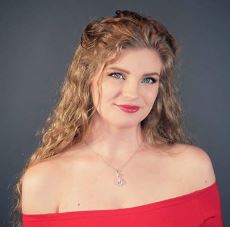 If the right-wing had a face in the age of the internet, Kaitlin Bennett would be it. Dubbed the “Kent State Gun Girl,” Kaitlin garnered social media fame after a photo of her carrying an AR-10 rifle in high heels went viral.

Stay till the end and learn how Kaitlin and her husband got married. Furthermore, get acquainted with her family background, net worth plus height.

In the Fall of 2019, Kaitlin Bennett became 24 years old. She is a Libra and celebrated her birthday on 15th October every year. What’s more, the notorious internet personality is born in the year 1995.

Interestingly, Kaitlin’s Wikipedia profile didn’t mention his family background. Little else info about her parents and siblings were available. Nonetheless, she grew up in a Republican household.

Post-graduation, Kaitlin used social media clout to become a right-wing internet personality. InfoWars’ very own Alex Jones even hired her as a correspondent for the network.

Besides her career as a YouTuber, Kaitlin sat in the panels and took part in seminars & conferences. Her anti-LGBTQ and anti-abortion remarks didn’t sit well with the liberals. In several instances, university students hounded Kaitlin off their campus.

Nevertheless, Kaitlin made a sizeable fortune because of her exploits. By 2020, her net worth swelled to $300 thousand. The figure, however, is subject to a change.

Coming to her physical features, Kaitlin Bennett stands a little beyond five feet and six inches in height. Her weight, meanwhile, hovers around 58 kilograms. More so, Kaitlin gets recognized for her curly blonde hair.

As of April 2020, Kaitlin Bennett owned 344k followers on Twitter. Elsewhere on IG, she possessed 183k followers. In neither of the stated social media platforms, Kaitlin garnered a blue check.

Kaitlin Bennett announced her engagement to Justin Moldow in February 2019. A year later, when the world was ravaged by the Coronavirus pandemic, they got married. 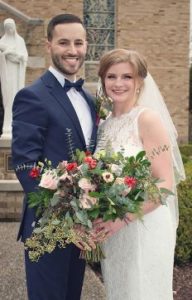 On 19th March 2020, Kaitlin made the wedding announcement via Instagram. Sharing a photo of them kissing, Kaitlin shared:

“Even through all the challenges we faced this week, we were still able to make a wedding happen. I’m so happy that everything worked out to end up being a perfect day with the most important people. Now he’s stuck with me forever.”

No sooner had Kaitlin unveiled her new husband, people began to question Justin’s motive. Some even labeled him a gay man. The gay suggestions arose from his alleged stint at conversion therapy.

Justin dismissed the claims via a series of tweets. Furthermore, he accused the liberals of hating while praising Kaitlin’s beauty.

By the time “Young Jeffersonians” materialized, Justin had gained ample experience in marketing. He helped their site grow in outreach by networking with other organizations.

Per his bio on “Liberty Hangout,” Justin identified“an avid proponent of libertarian thought, as well as Austrian economics, and is a steadfast defender of liberty.”

Meanwhile, many branded Kaitlin the face of “Liberty Hangout”. What’s more, she became one of the most influential content producers of the site.

In many ways, Justin’s Catholic roots influenced his political views. Likewise, he owned a blend of Jewish, Spanish, and Italian ethnicities.

For education, Justin attended Manhattan College and completed a B.S. in marketing. While there, he was socially and politically active. Justin even founded the Young Americans for Liberty.