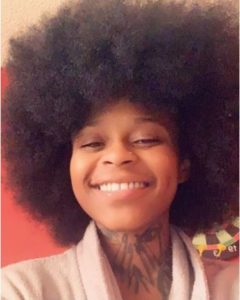 ‘Emotional’ would be the right term to describe Just Sam. But, Sam isn’t a crybaby for no reason. She lived a life full of struggles and earned living by performing on the NY subways since middle school.

Also, Sam is a spiritual person. At the audion of American Idol 2020, she asked the judges to pray along with her after she won the golden ticket to Hollywood. Judges would eventually crown her with the title of American Idol in the finale aired on 17th May 2020.

Reportedly, she attended Chruch services every Sunday morning and sang with The Rock Church in Harlem.

Learn everything about Sam’s bio and life story as the article unravels.

Just Sam’s real name is Samantha Diaz. She was 21 years old when she first auditioned for the American Idol in 2020.

Also, there was a short bio-documentary about Sam called Sam, Underground, where she talked about her parents, sexuality, and childhood.

On 23rd November 2019, Sam turned 21 years of age. She celebrated her birthday on the International Aura Awareness Day. Furthermore, she was born in New York City in 1998.

Sam loved her grandmother more than anyone in the world. She even dedicated a post on her Instagram with a long caption about how grateful she was for the unconditional love her grandma gave her.

Sam recalled — she, her sister, and her friend Tiffany used to go to her birthmother’s job. They decide to perform right in front of where her birth parents worked and also made good money out of it.

Since then, she started singing in the streets, subway stations, and inside the trains. On a good day, she even made $100 a day.

Just Sam always knew that her voice would someday make her dreams come true. She even predicted back on her Instagram post in 2018 that her time was coming soon.

On her audition for American Idol 2020, she started softly with Lauren Daigle’s You Say but couldn’t hold back her tears as she reached the second line. She then started over, doing the ‘train thing’ and enticing the judges with her cover of Andra Day’s Rise Up.

Sam made it through the first round of Hollywood week with her take on Arlissa’s Hearts Ain’t Gonna Lie and her lucky charm (tip box) in front of her. Suffering from a sore throat on her second round she pushed herself performing her version of I’m here.

Katy used the term “metamorphosis” as Sam performed on the Hawaii week with Selena Y Los Dinos’s Como La Flor. She came out with a whole different style and class, surprising everybody.

Katy, Luke, and Lionel continued to sing Sam’s praises when she performed Fantasia’s “Believe” during the Top 20 showcasing. They did the same when Sam sang Bill Wither’s “Grandma’s Hands” while vying for the spot in the Top 7.

For the Disney Night, Sam went with Ilene Woods’ “A Dream Is a Wish Your Heart Makes.” And on Mother’s Day performance, she sang Christina Aguilera’s “I Turn To You.”

As of 2020, Just Sam’s net worth was around $100 thousand. And it was bound to rise soon. Moreover, the singer was on her way to record her albums. And with her admirers on the rise, many predicted she might even win the title of American Idol. Credit to her, Just Sam didn’t let them down.

Just Sam was passionate about tattoos. She had tattooed most parts of her body and her most prominent tattoo on her neck looks similar to that of a tattoo from a Parisian artist Johnny Gloom.

Also, to her fans who wanted to support her during her American Idol journey, she had a go fund me page.

On her documentary, Just Sam divulged:

“I like when people mistake me for a boy, because that’s what I’m going for.”

Sam was always close to her best friend Jessica. One morning, as they were chilling out, Jessica pointed out that Sam was a lesbian. To which Sam replied,

When she was in high school, Sam would dress up girly, had long hair, and wore skirts. So her friends would ask her, “If you are not a dike, A.G. or effeminate then what would we call you?”

So her friend, Jessica, and Samantha came up with the name ‘Goy’. It was not a girl or a boy but both. Sam loved the name and preferred to call herself a Goy.

Admittedly, Sam wanted to be a man and shave her head. However, upon discovering God, she decided not to go with the transition. Tapping into her feminine side on her 21st birthday, she wore makeup and a dress for the first time.

As to Sam’s partner preferences, she hasn’t spoken much about her dating life. Fan’s were in anticipation as to whether she would take a boyfriend or a girlfriend to be her date.

Before the end – Apryl Jones Wiki, Dating, Net Worth, Height