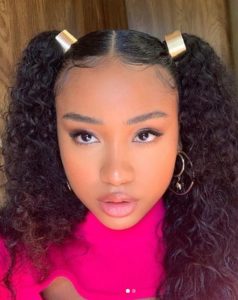 Netflix expanded its sitcom library by adding a new TV show titled #BlackAF in its catalog. The show was created and produced by Kenya Barris. The first episode of the show was released on 17 April 2020.

Among several actors who starred in the show, Gennya Walton turned heads with her beauty and phenomenal performance.

This wiki-article primarily focuses on the family life, career, and boyfriend status of the beloved actress, do delve in.

Genneya Walton was born on 22 February 1999. She turned 21 years old while celebrating her birthday in February of 2020.

As per the date of birth of Genneya, her zodiac sign is Pisces.

Genneya Walton spoke very little about her parents. As of 2020, her mom and dad hadn’t been featured in her social media accounts. Though she didn’t name them, she always cited them to be the prime source of inspiration.

As for her siblings, Genneya grew up alongside a younger sister. Moreover, the actress is an American national from California, boasting African-American ethnicity.

Though Genneya Walton is best known for her acting prowess, she didn’t start as an actress.

She was very fond of dancing. Her mother put her in a dance class to further hone her skill as a dancer. Not only did she earn the pass into the entertainment industry with dancing, but also helped her to overcome her shyness and break out of her shell.

Genneya was trained with hip hop, Jazz, lyrical, contemporary, ballet, tap, and many other forms. Whereas, she took acting classes at Brooke Byler Acting Studio.

After a few auditions, she started representing Clear Talent Group.

Before making it into the TV show, she was actively involved in live performances. She performed in 5 LP’s Music Video/Concert, MDA ‘Make a Muscle’, Dancescape, and Dizzy Feet Benefit Gala. Furthermore, she also had some gigs in commercials and prints.

In 2012, Genneya appeared in Just Dance: Disney Party as a principal dancer. It was marked as her first TV appearance. Moreover, she went on to star as Renata Isabelle Dances Into the Spotlight.

As of April 2020, her burgeoning net worth was yet to be estimated. Since she kept landing major roles in acting, the proceeds from the same would surely help her reach the first $1 million.

In almost 8 years long career as an actress and dancer, Genneya Walton was able to impress a lot of viewers. On her way to fame, she started gathering fans one day at a time. And her media reach was evident through her social media accounts.

As of April 2020, Genneya Walton was never spotted getting cozy with any of her possible boyfriends. After eight years in the entertainment industry, she must’ve had a few dating experiences but her private nature restricted to take a peek into her dating life.

Since none of her social media posts hinted at her being in a possible relationship, fans concluded that she seemed single.