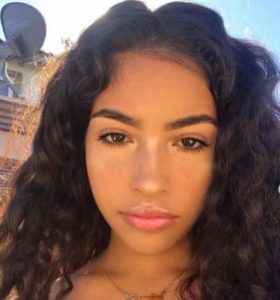 Meet Elle Monae, who is on the lookout for love and lust in the second season of Too Hot To Handle.

The June 23, 2021-episode i.e. S02 E04 of Netflix’s reality show ended on a cliffhanger teasing the potential elimination of existing cast members and the arrival of some new faces. And among the latter ones is Elle Monae. Find out more in this Elle Monae Wiki.

Elle Monae On Too Hot To Handle

As per the show’s premise, Elle lives together with her attractive stranger friends in a beachside villa. They are meant to form significant relationships with one another. But, the caveat being, they must abstain from any explicit sexual activity during their stay.

Elle, when introducing herself to Too Hot To Handle viewers, had said, “no girl is going to get in my way because Elle does what she wants.” Following her declaration, “We’re here to mix and mingle, so, like, let’s do that”, she quickly formed a connection with Nathan.

She and Nathan formed a brief connection during their solo date. But Elle soon realized that it was more friendly than anything else. And so not wasting any more time, she decided to pursue it just for the sake of it.

Elle is supposedly like her co-contestants on the show who decided to be on TV having done engaging in meaningless flings and not being able to form long-lasting relationships in their life before. So, there are chances she does not have someone waiting for her back at home.

Now, watch out for the finalist — if or not she succeeds in her abstinent efforts. If or not, she will there to split the $100,000.

Meanwhile, probably a spoiler had it writing, Elle came out from the show single but stronger than ever.

She was reportedly born in 1995. If the fact was to be true, Elle Monae would have reached the age of 26 in 2021, as she celebrates her birthday on Jan. 26th every year. So, the proud 90s kid is an Aquarius.

Based on Elle’s location listed in her introduction on Too Hot To Handle, she is based in Washington, in the Pacific Northwest region of the Western United States. Although we were not sure if the place is also her hometown.

Gowing up, it seems, Elle Monae and her sibling Navell were close to their grandparents. Otherwise secretive about her early life and family background, Elle shared she looks like her grandmother and Navell looks like their grandfather.

Her social media also revealed: Elle graduated high school in 2013 and back then she felt bad her aunty Keisha Brown could not make it to her prom night celebration.

About the plastic surgery rumors, Elles shared her “TRYING LIP FILLER FOR THE FIRST TIME” moment on her ELLE DIARIES YouTube channel early in Sep. 2020. She had then explained she wanted to share the experience with those interested in lip filler. And that she was “super happy” with the results from Dr. Gerstman.

Other than this, Elle is a committed vegan often sharing her plant-based diet plans on social media.

Until July 1, 2021, Elle Monae had 34.5K followers on her health and beauty blog on Instagram @elle.monae.

Elle could be spotted on her YouTube channel @Elle Diaries. And lastly, her fans also spotted her on Depop, a peer-to-peer social shopping app, as @@elles_ootd.

Elle Monae had less than an estimated $250K net worth before the world knew about her Too Hot To Handle stint.

She is a designer and founder of her own brand Star X Crossed LLC, which is a product line that incorporates her love of astrology with fashion and style. Star X Crossed claims to provide clothing items as well as accessories that represent various personalized astrological signs.