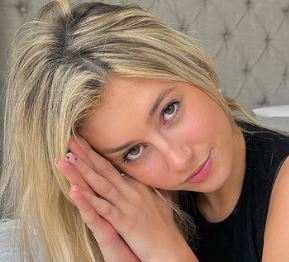 Netflix’s Too Hot To Handle season 2 is back, and the show seems promisingly steamy and scandalous as the last. Moreover, with the addition of the party girl Carly Lawrence to the cast, everyone is going to have a hard time following the rules — no kissing or heavy petting.

So, who is she? Keep reading this Carly Lawrence Wiki and find out.

Carly Lawrence On Too Hot To Handle

Even during the COVID-19 filming restrictions, Too Hot To Handle found a way to film its second season by moving the production from Mexico to Turks and Caicos Islands. This season, Carly was joined by co-contestants Cam, Chase, Emily, Kayla, Larissa, Marvin, Melinda, Nathan, and Peter.

The self-proclaimed “man-eater”, Carly doesn’t like “being told what to do.” So, some dramas were all ready for the show’s contestants. A few fans even compared Carly to the show’s inaugural season contestant Hayley Courton for her “cunning ways.”

Overall, besides aiming for the $100,000 prize money, Carly was here to have a good time and to meet a guy or two.

Reportedly, the first four episodes of Too Hot To Handle will hit Netflix on June 23, and the remaining six episodes will drop a week later on June 30.

Carly promoted the show over her IG on June 16, and wrote,

“SECRETS OUT!!! I have been waiting months to be able to finally share what’s been going on in my life…”

She then went on to add, she was “excited and nervous” for all her viewers to “watch her on this series”. Nonetheless, she wanted to thank all of them for their support.

Corresponding to her birthday, Carly is of the Gemini zodiac.

Reportedly, her body measurements were 37-23-36 inches.

Mentioning her distinct features, Carly has emerald-ish brown eye color and blonde hair. Also, she has at least four tattoos on her body. The first is on her index finger inscribed the year 1964; the second is a small butterfly on her middle finger; the third is a bigger butterfly on her buttock, and the fourth is another butterfly and a word written on her wrist.

Carly Lawrence might be popular amongst her crowd, but her mother was even more loved by her mates (not literally though). If you haven’t been following Carly over Twitter then, you might have missed out on all the good words tweeted in her mother’s appreciation.

A follower wrote, “Walk into Lonestar & @carlylawrence_’s mom is like “HAAAAYYYYYY!!” & saying she misses me & stuff omg I love&miss her.”

Apart from her mother, there was no information available about Carly’s family.

As for Carly’s hometown, she was born and raised in Toronto, Canada. It was also where she learned to party! Before joining Too Hot To Handle she was often found on Toronto bars like Petty Cash, Bar Karma, and Escobar; as well as restaurants like Laissez Faire and The Parlour.

Also, she was present on Fanchella @Carly.

One look at Carly Lawrence’s IG, and it is hard for anyone not to wonder if she is a professional model. A bikini-ready model by profession who’s not afraid of a good thirst trap here and there, Carly has been working as a model for quite a while now.

As of 2021, she has modeled for various iconic companies including Hayley Elsaesser and was represented by Spot 6 Management and B&M Model Management agencies.

Previously, she has also been a competitive dancer.

More of her job ventures were available over her Linkedin (now-deleted).

Carly Lawrence flaunted a net worth of under $250 thousand as of 2021. Just in case you are curious, an average salary of a model in Toronto, Ontario, Canada was around $60 thousand per annum.

Apart from modeling, Carly also reeled in a few bucks from her OnlyFans @carlylawrence where she charged $9.99 per month.

Carly Lawrence established herself as a girl who was not ready to settle down any time soon. Confessedly, she wasn’t on Too Hot To Handle to find her “perfect partner”, rather she was there to have fun and let loose.

At the time of joining the reality show, Carly had no boyfriend and wasn’t dating anyone.