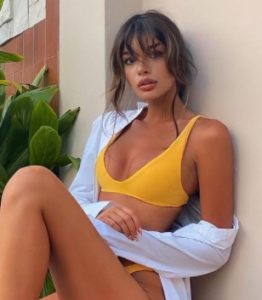 After the massive success of the reality TV dating game show Too Hot to Handle, Netflix ordered the Season 2 of Too Hot to Handle in 2020. On May 19, 2021, the streaming giant announced that the series would premiere on June 23, 2021.

With the release of Too Hot to Handle Season 2 trailer on May 15, 2020, on Netflix’s YouTube channel, People exclusively revealed the faces of 10 young contestants.

Though the filming location of this season was changed from Punta Mita to the Turks and Caicos Islands, the premise remained still the same — Don’t make any physical contact with the other contestants for four weeks straight and take a massive $100,000 home.

One of this season’s 10 faces is a young and sensual girl, Kayla Jean. From her journey on Too Hot to Handle to her age and net worth–learn everything about her in this Kayla Jean wiki.

Kayla Jean On Too Hot To Handle

Coming into the show, it will not be easy for Kayla to avoid any physical contact with her costars especially when there will be the presence of some sexy dudes in the villa.

People report that Kayla loves bad boys and has never been rejected. The outlet further added that her strict upbringing gave her a rebellious wild side when she left home so breaking the rules come naturally to her.

It will be interesting to if Lana–the virtual assistant–can keep Kayla in her check or will Kayla let her rebellious side be dominant and break the rules.

Viewers will be seeing Kayla in action beginning on June 23. Joining her in the villa in the Turks and Caicos Islands are her co-stars Cam, Carly, Chase, Emily, Larissa, Marvin, Melinda, Nathan, and Peter.

Kayla Jean was 26 years of age in 2021. She celebrates her birthday on the 9th of December every year. Kayla’s December 9th birthday gives her a zodiac sign of Sagittarius.

Kayla Jean stands at an average height of 5 feet 6 inches and weighs no more than 50 kilograms. She boasts juicy body measurements of 35-23-34 inches and a toned body which adds to her beauty.

Kayla Jean was born in Florida, the US, and had a strict upbringing from her family.

Her Instagram bio tells us that her ethnicity is Filipino-American. At least one of her parents hails from the Philippines.

Over the years, Kayla has also uploaded some of her family pictures on her Instagram handle. Katrina is her cousin whereas Tayler Flint and Carter are her family members.

As of June 2021, Kayla Jean was only available on Instagram.

People reports, “Laidback Florida girl Kayla is happiest when hanging at the beach, tanning, and surfing — and eyeing up the talent.” Therefore it should come as no surprise that her Instagram feed is filled up with scintillating pictures of herself in bikinis.

We do not know if Kayla will ever join Facebook.

Besides being a reality TV star, Kayla Jean is a model and a bartender by profession.

Kayla is signed with AC Talent Management and works as a model for the company.

Most of her net worth comes from brand endorsements. In the past, she has already endorsed brands like Nahla Swim, Swim Wave Babe, Keeks Vintage, Ama Bikinis, Life Aid Bevco, August Effects, and Knock Out watches.

When Kayla is not modeling, she works as a bartender at a Florida-based bar.

Aside from being a model and a bartender, she is a traveler too. She often travels to places like Moraine Lake, Canada, and Costa Rica and puts photos from the trips to her Instagram handle.

Kayla also revealed once that she takes French classes she wants to move to Paris one day.

As of June 2021, we did not know how much Kayla made as a bartender. But from reports, a bartender in Florida roughly makes $37 thousand a year. Kayla earns most of her net worth through brand endorsements.

As of this writing, her net worth was reported to be around $250 thousand.

For education, Kayla went to the University of North Florida and was a part of The Zeta Tau Alpha Sorority.

We do know that Kayla Jean has already dated a handful of men coming into the hit Netflix show. However, one thing we are not certain of is who was her boyfriend in June 2021. 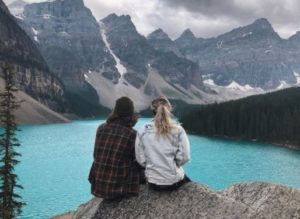 On August 18, 2019, Kayla uploaded a picture of herself and some other random guy sightseeing tour of Moraine Lake in Canada. However, the photo did not reveal any details about the guy as it was clicked from the back. Therefore, we cannot exactly say the guy in the picture was her boyfriend.