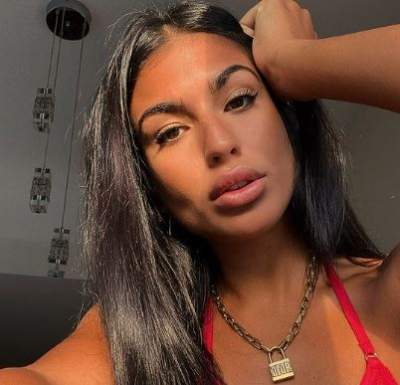 Meet Emily Faye Miller, one of the singletons on the lookout for love and lust on the second season of Too Hot To Handle.

Before the new series is dropped on Netflix on June 23​, 2021, here’s an Emily Faye Miller Wiki covering all that you have been prying about her.

Emily Faye Miller On Too Hot To Handle

So, Emily Faye Miller entered the American-British reality television dating game show for the summer-long celibacy as a single lady with no commitment elsewhere. She will be testing for the limits alongside contestants Cam, Carly, Chase, Kayla, Larissa, Marvin, Melinda, Nathan, and Peter to win a $100,000 prize.

As part of the rules, Emily and her co-stars will reside together in paradise (the Turks and Caicos Islands). And basically, each time one of these contestants is found to be engaging in sexual activity or breaking any one of (no kissing, no heavy petting, and no self-gratification of any kind) rules the $100,000 prize fund will take a hit.

The show’s host and virtual assistant Lana will be on hand to execute the rules just like the previous season.

Emily Faye Miller had reached the age of 27 when she decided to take her career on Netflix’s popular program. Probably fans will get to know about her birthday and more once the series goes on-air.

Emily Faye Miller hails from the United Kingdom and therefore she held a British nationality. And because she is multilingual, many have it believing her parents are of different backgrounds.

For now, little was known about her early background, parents, and siblings (if she has any).

Emily Faye Miller stands 5′ 6″ tall in her attractive figure. Her FOMO profile enlists her chest, waist, and inside leg measurements respectively as 35, 25, and 37 (inches). Also, she wore shoes with a size 6/39.

She is also distinctly defined by her natural long black hair and brown eyes.

Emily is working her way up on the social media scene as well. So far (June 2021), she entertained the highest number i.e. 12K followers on Instagram, and could be spotted also on Twitter and TikTok. She also already had a ‘Too Hot To Handle’ fan page account.

Her social media sharing is mostly the snapshots from her modeling photo shoots, vacations, and day-to-day life as a fun partygoer. She keeps her followers updated on the latest fashion trends and looks.

Also based on what she noted on her Instagram account, she is signed to Robert Wilson’s modeling agency, FOMO Models, which also represents her Too Hot To Handle co-star Cam Holmes. (Proud to be representing “beautiful” Emily FOMO had cheered for her reality TV stint in an Instagram post.)

Emily Faye Miller did not seem to be dating anyone at the time of this writing.

Based on her introduction on Too Hot To Handle, she seemed to have experienced a fair number of romances in the past though.

A self-proclaimed “life and soul” of any party she goes to, Emily even shared she is not afraid to break a few hearts in search of satisfaction. The multilingual also explained she has no interest in commitment and is used to getting what she wants. But will she be able to resist temptations and stay on the game till its end to take home the hefty reward?

Only time will tell.

If you already do not know, the first four episodes of Too Hot To Handle Season 2 will be available on Netflix on June 23, and the remaining six episodes will be on it a week later on June 30 in 2021.