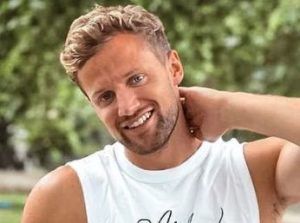 Netflix’s Too Hot To Handle season 2 is here. After already bombarding us with a string of attractive contestants, the show revealed its two new contestants — Christina Carmela, and our star for the article Robert Van Tromp.

So who is this new face? Stay with this Robert Van Tromp Wiki to learn all about him.

Robert Van Tromp On Too Hot To Handle

Even during the COVID-19 filming restrictions, Too Hot To Handle found a way to film its second season by moving the production from Mexico to Turks and Caicos Islands. This season, Robert was joined by co-contestants Cam, Carly, Chase, Emily, Kayla, Larissa, Marvin, Melinda, Nathan, Peter, and Christina.

Reportedly, Robert Van Tromp will be joining the dating show alongside the South African pilot Christina Carmela over episode four. The revelation came after the two new sexy contestants attended a photocall at Fulham Beach Club, London on June 23, 2021.

The first four episodes of Too Hot To Handle hit Netflix on June 23, and the remaining six episodes were scheduled to drop a week later on June 30.

Robert Van Tromp was aged 29 when he first appeared on Too Hot To Handle in 2021. Likewise, his co-contestant Christina who joined the show alongside him was a year older than him.

Information about his birthday was kept private.

Robert Van Tromp was born to parents, Pat and Phil Van Tromp. Is it only me or does their name sounds like the partners in crime from the movies? Well anyway, his father Phil is a Saint Albans native who went on to become an Inspector at Royal Hong Kong Police. He then married Pat on October 9, 1976, and 16 years later Robert was born.

As of 2021, Robert’s parents resided in Saint Albans, where Phil was enjoying his time as a retiree. Even his FB profile mentioned, “now I am fully retired and loving it.”

Talking about his siblings, Robert has a brother named James Van Tromp who lived in Tring, Hertfordshire with his wife Andrea and their kid. He is the owner and founder of an interior designing company named Aylott + Van Tromp. Previously, James worked as a designer for Broadway Malyan and Banbury Walker Studio.

Also, Robert has a sister who remained anonymous. She once appeared over Robert’s FB cover picture. 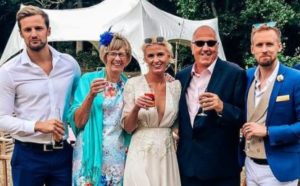 Robert Van Tromp with his parents and siblings (Source: Instagram)

Trivia: Robert always wanted to travel the world alone ever since he was a kid. So, he left on his first journey to Costa Rica a few days before the clock struck 2020. His parents were there to send him off with a smile on their faces.

Mentioning his distinct features, Robert has blonde hair, blue eyes, and a bulky physical appearance. Also, thanks to these features, this handsome hunk was labeled to be “British beefcake”.

Furthermore, Robert confessed to being “clueless and intelligent” at the same time, He added, “I can be a bit of a dirty dog” at times.

Another captivating feature about him would be his smile. You might have seen him smiling all the time. But that was only because he was “getting a lot of sex.” Well, at least this was what he said.

As of June 2021, Robert entertained 8.2K followers over Instagram @robertvantromp.

Find him over Facebook @robert.van.tromp; where his cover pic boasted his family.

Most of his posts then featured himself flaunting his chiseled body, and his adventures.

Before that, Robert worked as a territory manager at Associated Britsh Foods plc for over a year.

Also, he took on jobs as a team manager at his alma mater, the University of Surrey, and as a sales executive at Audi UK (each for over a year).

His first job ever was as a swimming coach at Sea Lion Swimming School. Previously, he was also a competitive swimmer, who won the title of “Dirty Dance Champion.”

Apart from these, Robert is a reality star and an actor. He once appeared on the commercial for the “National Beer of Costa Rica”, Imperial.

Before joining Too Hot To Handle, Robert Van Tromp had a girlfriend named Mariana Sofia who worked at the Festicket. No wonder, the two chose Rize Festival for their camping date in 2018.

Also, the couple shared enthusiasm for traveling. In 2018, they were spotted on vacation out in Rhodes, Greece.

Unfortunately, it could be that the two separated soon after. Robert wasn’t the guy who preferred committed relationships over casual flings. He was someone who deemed physical attraction, intimate links, and sex to be as important as food in his life.