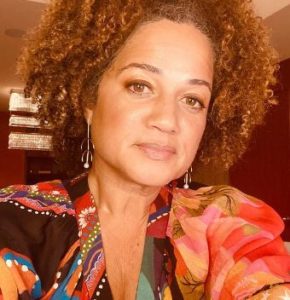 Besides being a businesswoman, Bridgid Coulter is best known as the longtime partner of Don Cheadle. The couple was together for 28 years before their secret wedding in 2020 during the pandemic.

Bridgid Coulter and actor Don Cheadle tied the knots in an intimate amid the COVID-19 pandemic. Don revealed the big news on The Ellen Degeneres Show and revealed it to the guest host Wanda Sykes. 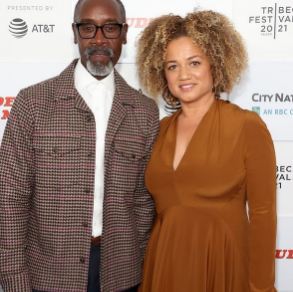 The comedian host shared: “You texted me at the top of the year, I guess, and you told me that you just got married… Oh damn, the pandemic got to Don and Bridgid… I was like, ‘What the hell happened, man? Hey, if you’re happy, I’m happy for you.’ I was like, ‘Cheadle went Hollywood.”

Don responded: “Yeah, I mean, that’s understandable given that we’ve been together 28 years before we got married, I hold you blameless.”

Neither Bridgid nor her husband shared any further details on their secret wedding. The now-married couple is parents to two kids: Ayana Cheadle and Imani Cheadle.

Bridgid Coulter was born on 2 August 1968. She turned 52 years old while celebrating her birthday in 2020. Furthermore, she secured Leo as her zodiac sign.

Bridgid Latrice Coulter was born to her father Stewart Coulter and her mother Irene Coulter in Alameda County, California, United States. Other than names and a few snaps of her parents on social media, no further details have been shared.

Bridgid had a Black American mother and a white American father. So, she is of mixed ethnicity.

Coming to details on her siblings, Bridgid Coulter has a brother named James Coulter and a sister named Jessica Coulter. James is a realtor by profession who worked at Douglas Elliman Estate Family. Prior to that, he also worked at Coldwell Banker Beverly Hills North Office.

Bridgid Coulter is very close to her grandparents and often shares pictures of them on his social media pages. Meanwhile, we couldn’t discover any details about her sister Jessica.

Bridgid Coulter has shared only a few snaps of herself and that included herself from her younger days. 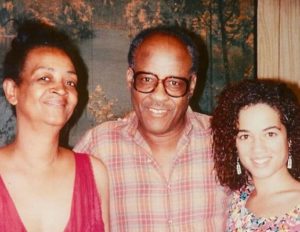 The interior designer is very close to her grandparents from both sides of her family. She occasionally pays tribute to her family members on her IG.

Bridgid Coulter doesn’t seem to have a Facebook. But, she could be discovered on Instagram where she went by the name @simplybridgid. On the platform, she was able to garner 2157 followers in total. Likewise, she posted a total of 460 times in total as of June 2021.

Furthermore, Bridgid could be easily discovered on Twitter. Her Twitter profile earned 381 followers and contains a total of 535 posts.

Bridgid Coulter stands tall at a height of 5 feet 7.5 inches (1.71 meters). Moreover, her curly light brown hair, square face, and cleft chin are some of her distinct features.

Bridgid Coulter is estimated to have a personal net worth of nearly $1.5 million.

Back in April of 2018, Bridgid and her actor husband Don Cheadle sold their home in Venice for $2.415 million. The contemporary-style house, sheathed in rust-colored Corten steel was completely renovated and expanded by Bridgid, to its current footprint of 2,400 square feet — about three times its original size.

A fenced courtyard, the house features nautical undertones, radiant-heated floors, high ceilings, and open-plan living space on the main floor. There are three bedrooms and three bathrooms, including a master suite with a separate sitting room.

The house was purchased by Bridgid and Don in 2016 for $894,000. The house was listed by her brother with his real estate firm.

Talking about Bridgid’s job, she has been the owner of Bridgid Coulter Design since 2005. In the company, she worked as a designer, builder, host & producer of lifestyle shows, designer of the interior, furniture, and textile, and creative office.

Bridgid is also the founding member of chief which started in March of 2020. Whereas, she also founded Blackbird House and has been serving as a CEO since November of 2018.

As for education, Bridgid Coulter had attended the University of California, Los Angeles. She earned her bachelor’s degree in Theatre.

Besides the interior designing business, Bridgid also shared Family Matters, Class of ’96, Murder, She Wrote, Rosewood, House of Lies, and Westworld are among the notable work to date. She has also worked on OWN TV’s Home Made Simple.