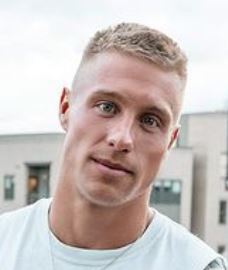 Too Hot To Handle is a new addition to the long line of reality shows about youthful promiscuity and western decadence, carelessly disguised as shows about romance. Too Hot To Handle is actually Netflix‘s foray into the genre. And like in everything else, Netflix seems to be succeeding. The second season of the show premiered on 23 June 2021 and one of the participants of the second season was Nathan Webb.

Read everything you need to know about the reality star in this Nathan Webb wiki. And find out interesting facts about Nathan like his age, height, job description, etc.

Nathan Webb On Too Hot To Handle

Nathan Webb became a part of the second season of Netflix‘s Too Hot To Handle. And his introduction for the show said that Nathan is a “Magic Mike style…stripper with a passion for country music and an even deeper passion for the ladies”.

Too Hot To Handle was a show in which 10 contestants spend four weeks on an island. And the only challenge is that you cannot be physically intimate and you cannot pleasure yourself. For each act of intimacy, you will lose money. And at the end of the four weeks, if you were able to control yourself, you win money. This season’s money pool was $100 thousand.

Nathan Webb was 27 years of age. But we do not know his birthday, nor do we know his zodiac sign.

Nathan Webb was originally from London, UK. In fact, according to his Facebook profile as well, his hometown was London. However, later in life, Nathan moved to Houston, Texas. And right now, Nathan’s nationality is American. In sports too, Nathan had become very American. He supports Houston Texans and Houston Rockets.

The name of his father is not known. Furthermore, it seems like Nathan had another brother, whose name we did not know.

Nathan Webb is a very tall guy, who probably stands at a height of over 6 ft. Furthermore, Nathan has blue eyes and tattoos all over his left arm, and some tattoos on his left shoulder area as well.

Apart from that, Nathan has an absolutely ripped body.

If compared to some of his fellow cast members in Too Hot To Handle, Nathan Webb’s Instagram following was not that big. But it does not mean that it was not significant. He had 28.9k followers on Instagram as of June 2021. He mostly used his Instagram to show off his incredible body, and sometimes to show off the quality times with his friends and family.

After the announcement of season 2 of Too Hot To Handle, he had been using his Instagram to promote his appearance on the show.

Nathan Webb is a stripper not too long before he was cast as one of the cast members of the second season of Too Hot To Handle. The average yearly salary of people with stripper jobs in Texas was $52k, with most people earning between $43k to $64k. Nathan’s salary also must be somewhere in that range.

Before starting in the job market, Nathan studied at the University of Houston. And he was an ardent country music lover.

As of 2021, Nathan Webb did not seem to have any girlfriends. Or at least, he did not have any when he decided to appear on Too Hot To Handle. And his Facebook profile also said that he was single.

According to Nathan’s introduction for the show, in the past, Nathan “had his heartbroken… and now he jumps from girl to girl”. Nathan has self-proclaimed to be a womanizer.

However, he was ready to give a second chance to love, a connection deeper than the one he gets from his womanizing ways. Too Hot To Handle, with its no physical intimacy policy, might help him to find his love. To find out if the show actually does that, you will have to tune in to Netflix on 23 June 2021.

He currently lives in Houston, Texas with his Rottweiler named Holly.