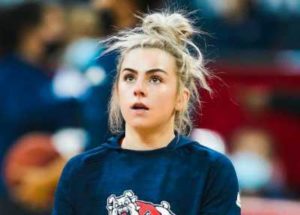 Fresno State Women’s Basketball players and twins Hanna and Haley Cavinder initially found the spotlight via TikTok. Since then they kept finding fame until they landed major sponsorship deals with Boost Mobile and Six Star Nutrition early in July 2021.

Meanwhile, in this Haley Cavinder Wiki, find out all about one half of ‘The Cavinder Twins’.

Born as a Capricorn, Haley Cavinder grew up celebrating her birthday on Jan. 13th. She reached the age of 20 in early 2021.

Haley Cavinder and her sister Hanna Cavinder were born in South Bend, a city in St. Joseph County, Indiana. Her parents are Katie and Tom Cavinder.

Haley’s dad played basketball at Nova Southeastern. Currently (2021), Tom is an experienced executive and founder of Southwest Elevator Company. He had been working there full-time since Oct. 2003.

For siblings, Haley has four sisters, Brooke, Brandi, and Natalie including Hanna.

All of her three sisters and mom have appeared on her YouTube channel.

Until July 2, 2021, Haley Cavinder had 260K followers on her Instagram @haleycavinder.

Meanwhile, Haley, together with her twin sister Hanna, enjoyed a whopping fan base of 3.3M followers and 66.5M likes on their joint TikTok account @cavindertwins.

The social media star and collegiate basketball player is best known as one-half of the Cavinder Twins.

Haley Cavinder had less than an estimated $300K net worth before June 2021.

Haley and her twin Hanna flew to New York to sign their very first major endorsement deals early in July 2021. The sisters were pictured holding the Six Star product and a dollar bill, which Haley Cavinder said, “The dollar we’re holding symbolized the first time STUDENT athletes have had the opportunity to be financially compensated for their names, image, and likeness and I couldn’t be more excited for that to happen!”

Previously, the twins had lead Fresno State to the WNIT in 2021. They completed their sophomore campaigns ranking top-three in scoring in the Mountain West Conference.

This past season, Haley was named the Mountain West’s Player of the Year. She was the third sophomore in the league’s history to be awarded the title. (Her sister Hanna Cavinder was an All-Mountain West section for the second straight season.)

In the coming years, her goal is to excel on and off the court since the NCAA has cleared collegiate athletes to make a profit from their name, image, and likeness.

Is Haley Cavinder On WNBA Yet?

Haley Cavinder was not WNBA yet. Instead, from 2020 until 2021, she was a sophomore in college. Besides playing basketball at Fresno State she was also a Business major there, at the time of this writing.

Meanwhile, because the WNBA’s age limit is 22 for the United States players, Haley is a few years behind before she is on WNBA.

For high school, she went to Gilbert High School.

Haley Cavinder was still committed to a relationship with her boyfriend Carson Towt, at the time of this writing.

Carson is just as much passionate about basketball as his girlfriend Haley.

The pair not just attended the same high school but also are from the same hometown of Gilbert in Arizona.

Standing to a 6′ 7″ height and weight of 220 lbs, Carson was majoring in business at NAU and won the Golden Eagle Scholar-Athlete Award in 2021.

On Feb. 5, 2020, the young couple celebrated their first anniversary. Carson Instagrammed the moment on his account @carsontowt writing:

“Gods greatest gift right by my side, happy 1 year Hay” 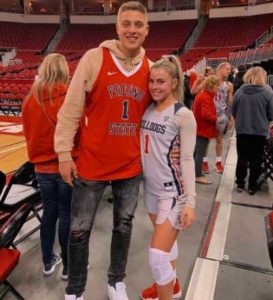 From what Carson shared on his socials, one could tell, he was the happiest with Haley based on the likes of “I never imagined one person having such a huge impact on my life, Happy 19th to my best friend👸🏼🤍 I love you more than words can” captions.