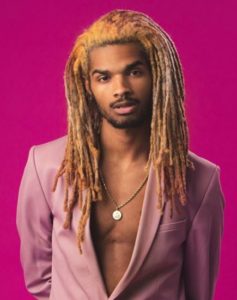 Detroit-based rapper Curtis Roach was long-related to Hip-Hop but not until March 2020, he hadn’t gained major traction for his music.

During the time of the COVID-19 pandemic, Curtis released a quarantine song titled Bored. The repetitive song that he had performed live went viral on TikTok, earning 26.7 million views and 4.3 million likes on the same by 5th April 2020.

This wiki-style article explores the career, relationship, and bio of Curtis Roach so scroll down.

Curtis Roach was born in 1999 in between April and May. But in an interview, he mentioned being a Taurus which means he was born between the date range of April 19 and May 20. He was born in Detroit and hails as an American national.

Curtis Garnett AKA Curtis Roach AKA Reggie was born to his Detroit native father, who had passed away in 2019, and his mother Martha Burch, who is a high school teacher and the biggest supporter of him.

As for siblings, he has two, a younger brother below him and a sister who is the youngest in the family.

His family often can be seen starring his TikTok and Instagram account. At the end of March 2020, the whole family made a sibling challenge TikTok video.

How “Bored In The House” Came About?

With the COVID-19 pandemic taking over more than 200 nations worldwide, most of the countries imposed a compulsory lockdown on people who were left “Bored in the house.”

The song was just him thumping on the desk with his fists and singing to it. He never expected it to go viral all over TikTok.

Many major artists and entertainers such as Janet Jackson, Chance the Rapper, Kylie Jenner reposted the video.

In an interview with Detroit Metro Times, Curtis noted that like many he was bored and had nothing to do. He knew about the virus but never expected a lockdown in quarantine. During that time, he made TikToks and it was just one of those videos.

And as for the success of the song, he remarked it was the alignment of all the situations and the song and major boosting from the TikTok celebrities such as Keke Palmer, Ondreaz Lopez, Charli D’Amelio, and more.

The song took a new level when hip hop artist Tyga called him. Eventually, Curtis redid the hook of the song, Tyga added his verse over Pliznaya’s production and there you have it, A Corona Lockdown Anthem.

Curtis Roach has been heavily involved in the Detroit hip hop scene.

The rapper started crafting rhymes when he was in fourth grade. Following that, he extensively invested much of his time in writing poetry. He kept on writing until the same poems turned into rap songs.

When he was 15, Curtis decided to invest whatever he made during Christmas to buy a mic. And then, he started recording songs which he has been doing still.

Growing up, his ears were blessed with a diverse taste of music his parents had. His father was really into West Coast Hip Hop whereas his mother listened to Stevie Wonder, Fugees, and Maroon 5.

And Curtis was really into Lil Wayne, Eminem, Kanye West, Missy Elliot, and few notable others.

Most of his music explores introspective topics. He speaks his pain and anxiety through them.

On 5 December 2017, he released his debut mixtape Highly Caffeinated. The 13-track mixtape gained some recognition to the rapper.

As for distinct physical features, he has long blonde braided hair and dons a nose ring which accentuates his looks that he got from his mother.

Between him and his siblings, Curtis had the most active dating life. Well, at least according to their mother. In a TikTok video, she directed at Curtis while answering the simple question: Who among the Garnett siblings possessed the best game?

On 6th March 2020, Curtis uploaded a video with an anonymous girl with the caption, “A true love story.” Most of his fans assumed her to be Curtis’s girlfriend but neither of them confirmed the relationship.

Along with that, she never showed up on his Instagram getting cozy with each other. So as of April 2020, he was most likely single.