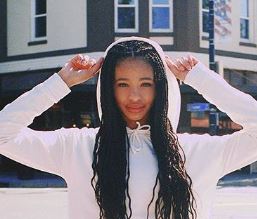 In March 2020, season three of the coming-of-age series “On My Block” was premiered on Netflix. Among the new faces on the show, Troy Leigh-Anne Johnson stood out for multiple reasons.

Intrigued about Tory’s bio and wiki details? Well, read till the end and discover her dating status, age, and height!

How Old Is She? Wiki & Bio, Birthday, Family

Because Troy Leigh-Anne Johnson was a relative newcomer, nobody had penned a Wikipedia profile dedicated to her (March 2020).

Based on her apperance — and apperance alone — Troy couldn’t be any older than 20 years in age. Thus, she was probably born around the turn of the century.

Coming to the young actress’ parents, Troy once Instagrammed a photo of her mom. Her dad and assumed siblings were nowhere to be found on the photo-sharing site.

Friends and family call Troy by her nickname “Bambi.” The origin story of the moniker confined to the rising actress’ circle.

How Tall Is She? Bio, Movies & TV Shows, Net Worth

Before gaining worldwide recognition through “On My Block,” Troy starred in several plays including the Echo Theater Company’s “The Wolves” and Greenway Court Theater’s “Ripe Frenzy.”

In 2019, Troy landed the titular character on the Echo Theater Company’s stage production of “Poor Clare.” Three years earlier, she made her acting debut by starring in the short film “Ujana.”

By 2020, two movies — namely, “Let’s Scare Julie” and “A Babysitter’s Guide to Monster Hunting” — featuring Troy were already in the post-production stage.

Being an up-and-coming actress, Troy kept her finances at bay. Her net worth, therefore, couldn’t be acquainted.

Getting into her social media presence, Troy joined Twitter in March 2014. Meanwhile, some 4.5k people followed her on Instagram (March 2020).

Troy Leigh-Anne Johnson On “On My Block”

Troy Leigh-Anne Johnson got acquainted with the TV audience through the character Kendra in the smash-hit Netflix show “On My Block.”

On the show, Troy was cast as the love interest to Brett Grey’s character Jamal.

“It’s so funny because [Kendra’s] sort of the opposite of Jamal. She’s super shy and really creepy, and really quiet and weird. So, like, it brings him down. You get a little bit more of who Jamal is as a romantic, but it’s also the most ridiculous relationship ever.”

As it does with any on-screen couple, fans began to wish that Troy and on-reel boyfriend Brett would start dating.

It may be hard to believe but Troy Leigh-Anne Johnson most likely entered the year 2020 as a single lady. The “On My Block” actress’ Instagram posts showed no sign of her engaging in the dating scene. 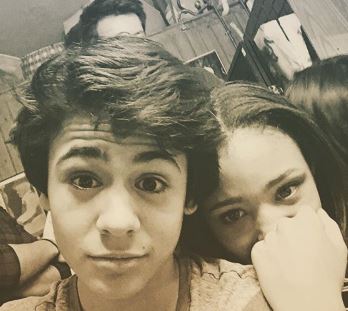 Back in 2015 and 2016, Troy was probably in a relationship with a boy named Diego Josef. Upon a close inspection, she and her assumed boyfriend could be seen exchanging flirty messages on IG.

Overtime, Troy and Diego’s romance must’ve fizzled out. By 2020, the latter was dating Mahina Bennett.

2020 was a breakout year for Momona Tamada. That year, she starred as Erica in the film “The Main...