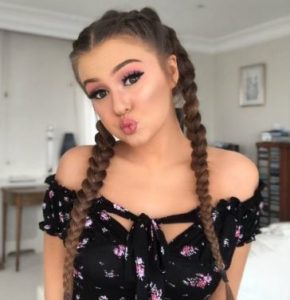 Beauty with a remarkable sense of humor, Holly H quickly rose to prominence through her comedic Vine videos around 2015.

The popular Viner, Holly moved to Tik Tok after the Vine application was shut down. She mostly posted dance videos and lip-syncs on her Tik Tok account @hollyh which amassed over 16.4M followers in 2020.

Holly H also owned a self-titled Youtube channel with over 377K subscribers before 2020. Her channel featured several Musically Tutorials and her vlogs.

Learn in-depth about Holly H as you tag along with the article.

The H. in Holly H stands for Horne. With full name Holly Horne, she was born on October 17, 1996, in Guernsey, an island off the coast of Normandy.

Born to parents Jody Horne and Steve Hubert, Holly has a brother named Phoenix and a sister named Megan.

Growing up, Holly’s family recalls her being a mischievous child. Amongst all her childhood notoriety, she once cut her sister’s hair just because it grew longer than hers.

Holly went to Guernsey Grammar School and Sixth Form Centre for her high school education. Later, she enrolled herself at the University of Greenwich for higher studies.

Holly H made a name for herself while Vines were trending the charts in 2015. Her humorous vine video compilation had gained over 20 million views.

After Vine was shut down, Holly was demotivated as her account had already amassed over a million followers. Little did she know that it was a blessing in disguise. The internet personality exponentially gained more followers on musically than she ever had.

Paving her career, Holly looked forward to the entertainment industry. She had made an appearance in the TV series High School Reunion and was featured in a video with the Li’l Ducky’.

In 2018, Holly was nominated for a ‘Teen Choice Award’ for the ‘Choice Muser”.

At the age of 18, she was in a living relationship but things didn’t seem to work out for them and they broke up at the end of 2015.

Her alleged boyfriend made an appearance on her video Boyfriend Does My Makeup in Sep 2018. Unfortunately, the video was taken down to avoid controversies.

“Like if you break up with someone you don’t want all those little cheesy edits, Aw we miss that, we shipped them so much. Because that would just be heartbreaking”

Holly explained why she chose to remain private about her dating life.

In 2018, distress rose amongst the Tik Tok community as Holly mentioned that she was pregnant in a tweet.

But to fans dismay, it was just another one of her pranks.