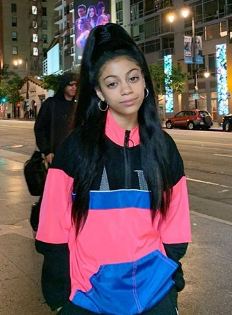 Actress Arica Himmel beams with potential. Blessed with a million-dollar smile, she ticks off every box on the list that predicts a born star.

Unravel Arica’s life by reading through her wiki-type biography!

According to her date of birth, Arica owns Pisces in Zodiac sign. She was born in 2005.

Arica Himmel comes from a family of film. Brandon Himmel and Zelma Davis are her biological parents. Meanwhile, she is siblings with big sister Zoe Himmel.

Talking about her family, Arica’s mother Zelma is a Liberian-born and American-raised singer. Her father Brandon Himmel, on the other hand, is a New York-based real estate agent.

Meanwhile, Arica’s sister Zoe is a Berklee College of Music attendee and a theater student.

In a 2019 Bustle interview, Arica opened about having to choose between his black and white side. In her middle school days, she faced microaggression related to her hair.

Arica Himmel made her acting debut in 2016 by starring in off-Broadway “The Layover.” Also that year, she starred as Harper Morgan in “Thanksgiving.”

After landing a guest role in the beloved show “Black-ish,” Arica went on to star as a lead on the spin-off series “Mixed-ish.” She portrayed the character, Bow Johnson.

Elsewhere on big-screen, Arica boasts features on movies “Make Dating Great Again” and “Before You Know It.”

Earnings from TV shows and films are Arica’s primary source of income. An aspiring filmmaker and a writer, she reportedly owns a decent net worth.

As of early 2020, there didn’t exist any report linking Arica Hammel to fellow teenage co-stars.

Understandably, Arica seemed pre-occupied with growing up as opposed to worrying about her next boyfriend. Dating, for the most, the part didn’t top her priority list.

In December 2019, Arica was profiled by journalist Brad Witter for Bustle.com.

Arica once cited Sofia Richie as her idol. She admired the model and reality star’s fashion sense.

As of late-February 2020, Arica had 52k plus Instagram followers.

Black-ish is one of the beloved sitcoms on TV right now. And all thanks to the creator of the show, Kenya...