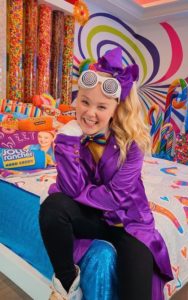 Most people in the world don’t even know what they want to do in the future but in the case of Jojo Siwa, things turned out differently.

Starting from a young age, JoJo was a prolific dancer which quickly made her a teenage sensation. Also, she featured in one of Lifetime’s biggest dance show “Dance Moms” and made a name for herself on the big stage.

Curious to know more? Read the article below and know about her personal life, net worth & relationship status.

While JoJo Siwa just turned 16 at the end of 2019, it seemed as though she was not old enough to involve in the dating game yet.

However, there was a time at the start of 2020 that made fans believe that JoJo was seeing a boyfriend. The news was fueled by an Instagram post made by the dancing sensation featuring her possible boyfriend, Elliott Brown in March 2020. 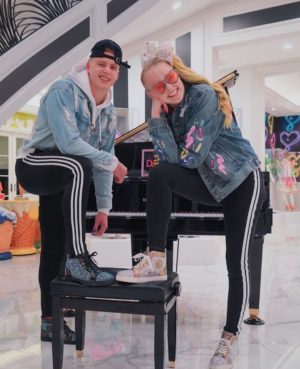 Many fans had their hearts in splits, but many also admired their pairing very much. When asked about her relationship with Elliot, JoJo called him a “family friend”.

In addition to that, JoJo also said she knew boyfriend Elliot for a long time back and called him a cool guy to chill out with. Other than that there was no confirmation of the two dating each other.

To talk about Mark, he is a TikTok celebrity with above 160 thousand followers. Moreover, he is the baby brother of social media sensation Madison Nicole Fisher.

On the 2020’s National Girlfriend Day, Mark hinted he was indeed JoJo’s boyfriend by sharing a video of them creating the “put a finger down” challenge.

On 22nd January 2021, JoJo Siwa came out as a lesbian/gay. The preceding days she alluded to it on social media.

Dancing to Lady Gaga’s LGBTQ anthem “Born This Way,” JoJo shared a video on TikTok. It quickly became her most popular content on the platform. Taking a step further, JoJo then tweeted a photo of her rocking a T-shirt that read— “Best. Gay. Cousin. Ever.”

Meanwhile, on Instagram, JoJo uploaded a picture of her sporting a rainbow Gucci jacket.

With her now out of the closest, many hoped JoJo Siwa would soon show off her girlfriend to the world.

In February 2021, JoJo Siwa finally revealed Kylie Prew as her girlfriend. She also claimed Kylie was her best friend.

While much of the credit went to her natural dance ability, some were also directed towards her mother, Jessalynn Siwa who was a professional dance instructor and also owned a dance studio of her own. Other than that, JoJo also released her first single as a singer “Boomerang” in 2016 which gained 16 million views worldwide in just 2 weeks.

Soon JoJo also tried on acting featuring in Nickelodeon’s TV Movie called “Inside Voice”. Apart from that, she also owns a YouTube channel where she posts most of her vlog and behind the scenes of all her tours.

At the start of 2021, JoJo Siwa was estimated to amass a net worth of around $12 million.

JoJo Siwa was known in the public for all the right reasons, including her singing, dancing, and acting capabilities.

All of a sudden one day, the “Dance Mom” alumn found herself exchanging fiery Instagram posts with Justin Beiber over her car which she received for the Christmas of 2018. Jojo posted a picture of the car with her picture painted on it to which Justin wrote “Burn it” in the comments. The next thing fans knew, Jojo posts another photo of her car, this time with a Justin Bieber cut-out and captioned it “Burn it”.

After the exchange, Justin took it upon himself and asked for an apology. Jojo also accepted the proposal with quick humor on her behalf, asking him to come over to her house and sing for her on her 16th birthday.

Talking about JoJo Siwa’s distinct physical features, she stands tall at the height of 5 feet 8 inches and weighs in at 63 kgs. She possesses naturally brown hair which she dyes to blond due to her mom. Also one of the predominant features of her outfit is her big hair bows.

Apart from that, JoJo was born in Omaha, USA to parents Tom & Jessalynn Siwa. She has a brother named Jayden Siwa.