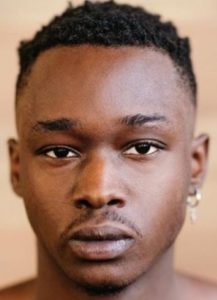 Ashton Sanders is an American actor who piqued the interest of many as he was cast in the movie All Day and a Night. In it, Ashton portrayed the role of a young man Jahkor who was sent to prison for Homicide but later reconnects with his incarcerated father.

Previously, Ashton gained the limelight as he depicted the teenage version of Chiron in the “Academy Award Best Picture” winning movie Moonlight. Furthermore, he has appeared in more than 10 movies and TV shows including Inner City, Straight Outta Compton, and Wu-Tang: An American Saga.

Also, Ashton had a dream to act as the first black Joker someday.

Learn more about Ashton Sanders’s girlfriends and the rumors about him being gay as we present you this short-bio.

Ashton Sanders was born as Ashton Durrand Sanders on October 24, 1995. That made him 24 years of age when the movie All Day and a Night was premiered. Reportedly, he was 17 years of age when he debuted in his first movie The Retrieval 2013.

Corresponding to his birthday, his zodiac sign is Scorpio. Also, he has his zodiac “a scorpion” tattooed on his right front thigh.

Born in Inglewood and raised in Carson, California — Ashton had a troubled childhood. He didn’t have many friends and was the ‘other’ kind of a black sheep in his community. Without siblings and friends to share with, Ashton recalled that his imagination was all he got.

For a young-black-boy to be interested in the art rather than playing sports with his friends, it wasn’t much appreciative of the community. Though he was labeled a weirdo, Ashton kept his sincerity to his practice.

Furthermore, it was his parents, especially his father, who supported him through and through. It might be a fact that because Ashton’s father was a fashion designer/artist, he understood his son better than anyone.

Allegedly, Ashton’s family struggled with addiction. At the age of 12-13, Ashton found solace as he enrolled in an acting program called Amazing Grace Conservatory. It was an all-black school that provided him a chance to educate himself in acting, singing, and dancing.

As for his education, Ashton graduated from Central Los Angeles High School. Later, he attended The Theatre School at DePaul University and has a Bachelors’s degree in Fine Arts in Acting.

Ashton Sanders’s net worth was estimated to be around $500 thousand in 2020.

As a fitness enthusiast, Ashton worked out regularly to maintain his 74 kg weight. His most distinct feature would be his extraordinary fashion sense and his light brown eyes. Ashton Sanders stands tall at a height of 6 feet (183 cm).

Ashton wasn’t much active on social media until 2020. His Instagram account @ashtondsanders had over 162K followers and mostly posted official matters rather than private.

Since Ashton liked to keep his personal life to himself, it was unknown if Ashton Sanders was married. Be it a wife or a husband, Ashton certainly would make a great family. His ability to acknowledge the freedom and operate beyond the limits of society is truly admirable.

With fewer reports of Ashton Sanders’s dating life, fans were eager to learn about his girlfriends. As of early 2020, Ashton had yet to disclose his love life.

To address the rumors about Ashton’s being gay, he had yet to speak on the matter. Some fans augmented that Ashton didn’t take a girlfriend because he might be dating a guy secretly.

Ashton mentioned that whether it’s dancing or acting, it was always a source of liberation for him. The “Moonlight” actor added he loved putting himself aside and putting on different personalities. It was an escape and had always been. Everyone has their issue and they need a release.

All Day and a Night Moonlight Straight Outta Compton

On 21st April 2020, Netflix premiered the All Day and A Night from the co-writer of Black Panther Joe Robert...

At the 2019 Emmy Awards, Jharrel Jerome took home the Outstanding Male Lead in a Limited Series laurel for...

Barry Jenkins is an unapologetically black filmmaker. His nuanced take on the African-American experience,...