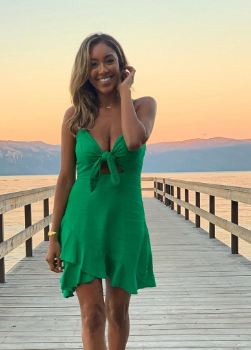 Tayshia Adams epitomizes the adjective “wholesome.” Besides flawless beauty, she possesses a kind heart and a beautiful personality. The fact that she volunteers in church during her free time and once went on a mission trip to Africa speaks for itself.

Competing on the 23rd installment of “The Bachelor,” Tayshia skyrocketed to popularity. While on the show, she fought for Colton Underwood’s love.

Dive into this Tayshia Adam’s wiki to learn intimate details about her life!

An Orange County, California-native, Tayisha celebrates her birthday on the same day as actor Tenzing Trainor.

Concerning Tayshia’s family life: her father’s name is Desmond Adams whereas her biological mother is Rosario.

A devout Christian, Tayshia was a girl scout for more than a decade. Over the years, she developed a passion for wine testing.

After graduating high school around 2008, Tayshia attended Cpmcprdoa University. In 2012, she completed her BS in Biology Medical Science.

A fitness enthusiast, Tayshia Adams began working as an instructor at the Newport Beach, California-based “Soul Cycle” after college.

To those wondering about Tayshia’s job title: She is a phlebotomist.

2019 marked Tayshia’s foray into the world of reality TV. After debuting with “The Bachelor,” she also starred in “Bachelor In Paradise” the very year.

In Summer 2020, amid the on-going Coronavirus pandemic, producers revealed Tayshia was replacing Claire Crawley as “The Bachelorette” for the upcoming season.

After getting engaged, Tayshia and now-former husband Josh tied the knot in the summer of 2016.

Sadly, the union wasn’t meant to be. A year and a half into their married life, Tayshia and then-husband Josh got divorced.

The separation was finalized in October 2017.  Per the divorce papers, Tayshia cited “irreconcilable difference” as the reason behind the split. Later, she claimed that her first husband Josh cheated on her. 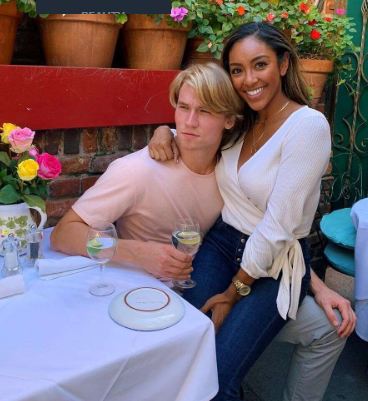 After “Bachelor In Paradise” ended, Tayshia and John gave their chemistry a shot and continued dating each other.

As it does with every long-term relationship, Tayshia’s romance with boyfriend John petered out. Respective conflicting schedule further widened their distance.

In late-October 2019, Tayshia announced her split from John via Instagram. In her statement, she insisted that they remained best friends.

When bachelorette Clare Crawley eloped with Dale Moss midseason, producers scrambled to find her replacement. That is when Tayshia stepped in.

Upon her entry, some left the show while others stayed. Among the handful of contestants, Ben Smith, Ivan Hall, and Brendan Morais were dubbed front runners.

However, it was Zac Clark who received the final rose from her.

While Zac took the knee, he claimed nothing in his life felt right. What’s more, long before they became an engaged duo, he impressed Tayshia’s parents.

For her part, Tayshia said she couldn’t point a flaw in Zac.

Tayshia and Zac revealed they weren’t in a rush to tie the knot after the finale.