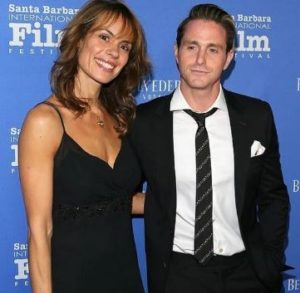 Cameron Douglas, the son of actor Micheal Douglas, welcomed his second child with his long time girlfriend Vivian Thibes. The couple already had a child before this one named Lua.

However, even after all these years, very little information has been known about Vivian Thibes. So, worry not, as this wiki article tries to unfold details on her.

Per her date of birth, Vivian secured Aquarius as her zodiac sign.

Vivian Thibes was born to her anonymous parents in Sao Paulo, Brazil. She credits her father for the belief in a higher power he had instilled in her at a very young age. In the same way, her mother has been a major source of love and inspiration and shows her gratitude towards her.

By nationality, Vivian Thibes is a Brazilian citizen. She enrolled at Hunter College for a college degree after she moved to the United States.

While there, Vivian studied film and media and earned her degree in the same.

Sadly, Vivian lost her father and witnessed the birth of her first child not long after, which for her as a Buddhist, stated a balance in the world and a cause to celebrate life.

Viviane tries to remain healthy in both body and mental health. As she practices yoga, she shares it with her followers as a first-hand witness of its benefit.

Viviane Thibes initially discovered meditation that soothed her mind and concentration. And it was all because of the Zen Buddhist monastery where she studied near her home.

Later, when traveling to India, she found a new passion to pursue, yoga. She started learning Yoga following that and even learned ayurvedic massage in the south of India.

After that, Vivian went on learning crystal healing and reiki in Dharmashala, the mountain home of The Dalai Lama. Later on, she returned to India to complete Jivamukti Teacher Training.

Vivian learned the Asian art of yoga and practices related to it under the apprenticeship of her teachers Dechen Thurman and Luis Davila.

The actress also studied took yoga teacher training at Atmananda Yoga Studio in 2015. She became a certified yoga teacher from Jivamukti Yoga in 2016 and started teaching in the same.

Her Instagram pages show the tutorial for yoga and various postures that help to keep the body healthy.

Jivamukti Yoga was founded by David Life and Sharon Gannon in 1984.

Besides yoga, Viviane Thibes also pursued an acting career. She starred in La riña (2008) which was nominated and won the Bronze Palm Award at the Mexico International Film Festival in 2009.

To close this section, Vivian Thibes comfortably sits on a total net worth of $400 thousand.

Cameron Douglas introduced his girlfriend Vivian Thibes on 29 June 2016. At the time, the couple had been dating for only five weeks or so.

When the troubled son of Micheal Douglas spent seven years in prison for drug-related charges, Viviane became his ride or die. As reported by a source to Page Six, she was in love with him for years.

Viviane visited him in prison, had phone sex whenever he was allowed to have phone calls, and supported him outside when he came out. This proved her loyalty towards him.

In September of 2017, the lovebirds announced the pregnancy on their respective Instagram. But in December, they went on welcoming their first kids, their daughter Lua Izzy.

But the relationship between Vivian and Cameron wasn’t all happy times. People caught them having a screaming match at hoity-hoity Hollywood eatery Cecconi’s. Both were enjoying dinner until they started their screaming match.

In December 2020, the couple welcomed their second child, a baby boy named Ryder. They also received congratulations and blessings from Micheal Douglas and his wife.

Before Vivian, Douglas had a few romantic relationships including the one with Kelly Scott. Kelly served seven months in prison for smuggling heroin to him.

And the second one was with Jennifer Ridha, a defense lawyer. Like Kelly, the authority also caught for the drug charges. With the second child in the world, most fans expect the two to get married in no time.

But nothing has been revealed in that regard.