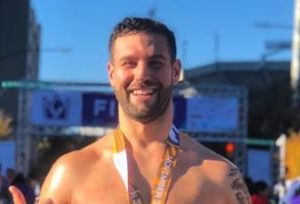 Jason Foster is one of the contenders appearing on Season 16 of The Bachelorette, to win over Clare Crawley’s heart.

And though Clare was soon to be replaced by another Bachelor alum, Tayshia Adams, Jason was hopeful of her. However, Clare seemed to have already fallen for Dale Moss but Jason wasn’t giving up either.

Here is everything you need to know about this adamant guy over this wiki-format article.

Born and raised in Arlington, VA, Jason Foster is a family guy. He humorously labeled his family as “crazy, dysfunctional, deranged, absolutely fun and degenerate family.”

He often uploaded the picture of them over Instagram.

In Jan 2020, as Jason’s dad celebrated his 70 birthday, Jason took it to Instagram to share that his “pops” was “the legend himself”; Soda Popinski, Mr. Clean, and Hercules.”

Furthermore, he thanked his dad for teaching the “fundamentals of being a good human being, having morals, manners, and most importantly, loving your family.”

Jason not only praised his father but also, shared that his mother was “the most amazing woman in the world.” Also, he thanked and credited her for making him who he is today.

As for his sibling, Jason has a little brother named Jordan.

Also, Jason has a cousin named Matt who got married in Sept 2019. He attended the wedding in Chicago with both of the parents.

Trivia: Jason’s mother, father, and brother all were born in January.

Corresponding to his birthday, Jason is of Libra zodiac.

As for his interests, Jason really liked animals; especially dogs and kids. Also, he liked to travel to historical monuments and go kayaking.

Furthermore, Jason was sincerely focused on his health and well-being. He even competed in marathons including Charlotte Half Marathon 2018.

As of October 2020, Jason entertained 8.5K followers over Instagram @jasonfoster74.

Talking about his job, Jason Foster was into IT staffing and solutions. In 2020, he was working as an account and resource manager at Signature Consultants for over 4 years.

But before he ventured into desk jobs, Jason was running out in the field. He is a former NFL offensive lineman who decided to make a career changed, after suffering too many concussions on the field. He played for Indianapolis Colts, Oakland Raider, and BC Football Club.

Jason Foster’s net worth was above $600 thousand in 2020. He earned a salary of around $65K yearly as an account manager in Washington, DC.

In light of his education, Jason attended the University of Rhode Island for a Bachelor of Business Administration and Management.

Jason Foster made quite an impression with Clare Crawley on the premiere of The Bachelorette season 16.

He wore a fake pregnant belly and got out of the limousine to greet Clare. It was a re-enactment of Clare’s first appearance on season 18 of The Bachelor back in 2014. The move worked well for Clare as she advanced all the way to the final two, and so it did for Jason.

Jason received a rose on the first night and received a compliment from Clare that she loved his energy.

Later on, in the season, Jason’s childhood was said to be revealed. Keep watching The Bachelorette and follow on the surprises it holds for you.

What Is Jason Foster Ideal Girlfriend?

According to his bio on ABC, Jason Foster’s ideal girlfriend would be someone who can keep up with his big personality. She needs to have a great sense of humor and an amazing laugh, so she can handle his sarcasm and laugh along with him.

Also, Jason wanted someone who could put him in his place when need be.