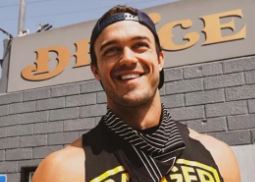 “Sweet Midwestern boy with California dreamboat good looks” — this is how ABC defined Ben Smith as he appeared on The Bachelorette season 16.

Ben was one of the many attractive men competing to win over the bachelorette, Tayshia Adams. As seen on TV, Ben got serious with Tayshia, and spoilers alert: he even made it to Tashia’s top four guys!

Also, according to the host, Chris Harrison, Ben is the “gentle giant of the season” and had an “incredible story” to tell.

Here is everything you need to know about Ben over this wiki-style article.

Also, Ben celebrates his birthday on August 8th, making him of Leo zodiac.

Before 2020, he lived in Venice Beach, California.

As for his hobby, Ben liked to take an ice bath.

Ben Smith is from Midwest with his hometown Noblesville, Indiana.

He grew up alongside side a sister named Madalyn Smith; who is a nurse as well as a fitness enthusiast like Ben. The Smith siblings were seen training on the Murph workout routine together.

Also, Madalyn was on the dance team at Purdue University worked at 11W Nurses Station in Chicago.

As for Ben’s parents, their names are David and Julie. They lived in a neighboring city of Carmel.

Ben’s dad, David was a dentist since at least 1984 and owned a dental clinic called Really Smile Dental.

Furthermore, Ben’s parents were close to him. In Dec 2019, Ben uploaded a picture on Instagram where he, his sister, mom, and dad were sharing a few glasses of “Southend Venice” wine.

Mentioning his distinct features, Ben is a handsome huge guy. Also, he is a ripped guy with blue eyes.

On the 1st Dec 2020 episode of The Bachelorette, Ben told Tayshia about his decade and a half-long eating disorder. Opening up further, he shared he had bulimia for a decade during his 20s.

Also, he made it clear his love for dogs by uploading several cute pictures of him with puppies.

Talking about his job, Ben Smith is a personal trainer and a nutritionist coach who worked at Deuce Gym. Also, he sold his fitness program called “Bodybuilding Club” at about $49 a month.

But Ben stumbled upon the fitness business. Previously, he joined in to serve the Army and became a Ranger. Unfortunately, during a Special Forces assessment course, he suffered a life-changing injury; breaking his back.

After the accident, Ben even thought about cleaning bathrooms. Then he had this epiphany that he was free to do whatever he wanted to. So, he took a job in L.A. and lived in Santa Monica.

In light of his education, Ben planned to attend the Indiana Univerity “like everyone else.“ But he got recruited to play golf at the prestigious military academy at “West Point.” Thus, his military choice of career.

Ben Smith’s net worth was estimated to be $150 thousand as of 2020. Just in case you want to know, the average salary of a personal trainer in California was around $69K per year.

Trivia: Ben got CrossFit Strongman certification with Robert Lando in 2011.

According to ABC’s bio on Ben Smith, “Ben is so ready to get married and is truly looking for the right woman to settle down with and start a family.”

Also, Ben was specific about the person he wanted as his wife. He wanted someone who can “openly communicate and stay emotionally available”.

Moreover, she should also be able to keep up with him on the dance floor. Ben isn’t the type of guy who would shy away from showing off his winning dance moves.

Ben is also a “big and a long talker”. So, perhaps a good listener as well?

Talking about Ben’s past girlfriends, he reportedly flew up to see a girl he had never met in person before. However, he didn’t share what happened to them.

Did u know: Ben loved to show affection through love letters when he’s in a relationship.

Since Clare Crawley was replaced by Tayshia Adams on The Bachelorette, his fans thought luck might have just smiled upon Ben. They had an eye on each other and many believed Ben might just be the new winner for the season.

True to earlier reports, Ben did make it to the top 4. However, it was Zac Clark who got the final rose from Tayshia.