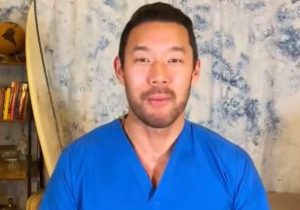 We have all been waiting for Bachelor in Paradise to return for its seventh installment, and the show’s premiere is close. But like always, many of us cannot wait to get to know the cast.

So far, only one cast member has been confirmed, and he is no other than Joe Park, who appeared on Tayshia Adams‘ season of The Bachelorette.

New to the name? Wanting to learn more about him? Don’t worry, we got you covered. Stay till the end of this Joe Park Wiki and enlighten yourself.

According to Reality Steve, Bachelor In Paradise season 7 was set to begin filming in early June of 2021. So, if that were the case then the season’s cast must have already been chosen.

Aside from the only confirmed cast Joe Park (confirmed by ABC Executive Rob Mills), a few other names were rumored to appear on the reality show. The male ones were — Connor Brennan, Kelsey Weier, Tammy Ly, Natasha Parker, Victoria Paul, Deandra Kanu, Mykenna Dorn, Maurissa Gunn, and Alexa Caves.

Before appearing on Bachelor In Paradise season 7, Joe Park was a “The Bachelorette” season 16 contestant. He was one of the participants who stayed on for Tayshia Adams after Clare Crawley‘s exit from the season. Unfortunately, he could only make it to week 7 and was eliminated from the top 16.

Although Joe may not have won Tayshia’s final rose, he certainly made an impression on the bachelorette. No wonder, the two remained friends even after the season ended.

But Tayshia wasn’t the only one Joe impressed on the show. After the season, his fans flooded Twitter with posts about how Joe should be the next Bachelor.

As per his birthday, Joe is of the Aries zodiac.

We’ve known Joe Park to be a sweetheart over The Bachelorette, and if you haven’t been following him on socials, he is even sweeter than you think. He often uploaded the pictures of his parents and siblings over his IG, to wish them on birthdays or just even to express his love for them.

Compiling that information over his IG, we’ve known that his mother turned 51 on November 21, 2020, and his dad celebrated his birthday on Christmas day (Dember 25).

As for his siblings, Joe has a sister named Evelyn J. Park, and three brothers named James, Thomas, and the third one went by the name @cpark1985 over IG (real name not known).

Trivia: Joe had a beautiful grandmother who turned 96 in 2015.

Mentioning his distinct features, Joe has dark eyes, a long face, and one may even argue that he looked like the actor Andrew Julian Hiroaki Koji from the Cinemax series, Warrior (2019).

As of June 2021, Joe flaunted 84K followers over his Instagram @josephparkmd. Most of his posts then featured him talking about different COVID-19 vaccines. But there were also glimpses of the adventures Joe ventured upon.

Joe Park garnered a net worth of over $4 million by 2021, thanks to his job as an interventional pain physician and anesthesiologist.

In simple words, Joe treated his patients’ pain (including back pain, sciatic pain, joint pain, migraines, neck pain, facial pain) with the most up-to-date techniques and modalities, and at the same time, he worked on finding ways to reduce pain through lifestyle modifications.

Looking for his educational qualifications? Well, Joe graduated from George W.Hewlett High School and went on to study science, technology, and international affairs at Georgetown University in Washington, DC. But it wasn’t until 2014, Joe became a legit medicine practitioner, graduating from Stony Brook University School of Medicine.

Just in case you are wondering, an anesthesiologist in New York made between $414 thousand and $541 thousand per annum.

Joe Park’s ideal woman would be someone he can have fun conversations with because he believed “that’s what relationship is built on in general”. Also, he wanted his future girlfriend to take things slow. “You can’t just dive into, like, ‘So, do you want kids? Where do you want to live?’”, he shared.

Furthermore, “kindness, gentleness, and calmness” were three factors he was looking for in a woman. And obviously, he needs to be physically attracted to her, that goes without saying.