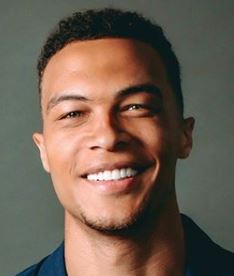 Dale Moss is a professional American football player who later turned into a reality show star. He became a part of almost every gossip media because of an amazing plot twist in the sixteenth season of The Bachelorette.

Read the article below to know about Dale Moss as well as the great plot twist in The Bachelorette.

Dale Moss was born on 24 September 1988. Thus, as of Jan 2021, he was 32 years of age. Furthermore, having his birthday on 24 September, his zodiac sign was Libra. Dale was born and grew up in Brandon, South Dakota.

Coming from different backgrounds, they faced fierce opposition from both of their conservative families. In fact, when Dale and his siblings were young, their father was not even present in the family due to extreme resistance to his presence.

However, Dale’s parents eventually won against the conservatism and remained together for over 43 years, before his mother’s demise at the age of 63.

Dale’s mother passed away in 2017 due to some kind of liver disease after living an inspirational life. Delores was also a professional basketball player, who had even played for the United States Women’s National Team.

Apart from his parents, Dale Moss had two siblings in the family, both of them sisters. The eldest of the Moss siblings was Dale’s sister Amber Moss. Amber suffered from an intellectual and physical disability, which went on to inspire Dale to be involved in philanthropic works. Amber was 37 years of age in 2020.

The youngest of the Moss siblings, and Dale’s younger sister, was Robyn Moss. Robyn was 28 years of age and worked as a real estate agent for Keller Williams Realty Sioux Falls. She was based in Sioux Falls, South Dakota.

Dale Moss stood at a very tall height of 6 ft and 3 inches and weighed a little over 90 kgs. Considering that he was an athlete, his measurements were understandable. He also had an incredible body with a 16″ neck, 35″ sleeve, 42″ chest, and 33″ waist.

For his college education, Dale went on to study at South Dakota State University. During his college days too, he played American football for a year as a wide receiver. He even went on to play on the practice squads of NFL teams like Green Bay Packers, Chicago Bears, etc.

Dale also played basketball for all four years of his college education.

After a brief stint in sports, during and after college, Dale entered the modeling industry. Dale’s athletic physique made him an ideal person for a modeling job. He was represented by Wilhelmina Models. His Instagram featured a lot of paid posts and adverts.

In his modeling job, Dale had not only appeared in a major fashion, lifestyle, and fitness magazines and but he had also had creative inputs for many projects of renowned brands. He had worked for brands like Under Armour, Hugo Boss, United Airlines, etc.

Moreover, Dale was also a philanthropist, who worked with different organizations for the betterment of society. Inspired by his elder sister, Amber’s intellectual disability, Dale held the position of Special Olympics Global Ambassador.

He was also a part of other philanthropic ventures like The Tiger Woods Foundations, Wounded Warriors Project.

Once upon a time, Dale also hosted a podcast called The Game Plan with Dale Moss, which centered around achieving personal and professional growth.

From all his various jobs, the sources on the internet estimated Dale Moss’s net worth around $2 million.

Now, the interesting bit, i.e. Dale Moss’s venture in The Bachelorette and the surprising twist, which was also related to his dating life. In July 2020, Dale was selected to participate in the upcoming rendition of The Bachelorette.

The love between Dale and Clare was so strong that they even got engaged. In a late August 2020 post, Reality Steve confirmed that Clare had left the show for Dale. And the two of them had engaged.

Considering that they went from meeting for the first time (Dale had never met Clare Crawley before The Bachelorette) to being engaged, the wedding bells and probably a few babies were soon.

Dale and Clare announced their split in January 2021. While the latter wanted to have kids and tie the knot, the latter did not. Dale called the split the healthiest decision for them.

Long before his stint on The Bachelorette, Dale enjoyed a long-term romance with Seema Sadekar. When he and the golfer split, nobody believed it at first. Neither opted to share why they broke up. During their years-long romance, Dale and his now-ex became close to one another’s family.

“Sweet Midwestern boy with California dreamboat good looks” — this is how ABC defined Ben Smith as he...