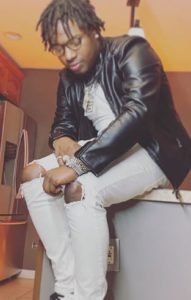 When the tragic news first broke, sources failed to cite Marlo’s cause of death.

“Not my mf bradda damn man I kno I ain’t got to say goodbye like this man this shit ain’t right MOB IN PEACE WHOAA 2Love….”

Meanwhile, rapper Lil Yatchy took to IG and shared a throwback photo of them. Also, in an accompanying caption, he wrote:

Marlo AKA Lil Marlo, within a short period of taking chances in rap industry out of friendly remarks from label acquaintances, was able to impress hip hop vet P Diddy.

Moreover, getting verse on his 2020 mixtape 1st & 3rd from acts like Future and Gucci Mane was a statement sent that the Atlanta-based rapper wasn’t playing at all.

Marlo’s career pursuit and details on professional life helped create this wiki-style article so delve into it.

Lil Marlo – real name ‘Rudolph Johnson’ – was born in Atlanta, Georgia, the United States. Turning 26 years of age in 2019, he celebrated his birthday in 2019.

Details on Marlo’s parents were obscure to follow through. The only fact that is known was, Marlo’s family raised him in the Bowen Home Projects.

Marlo and Lil Baby grew up together as close friends and blood brothers around the 9th ward in west-Atlanta. They were related to each other through the art of rapping. Together, they worked on completing a mixtape titled 2 The Hard Way.

Details on Marlo’s siblings are yet to see the light of the day as of February 2020.

Marlo’s debut mixtape The Wire was released on 1st December 2017. It was followed by 9th Ward God released on 9th March 2018.

All his mixtapes and collaborative projects were released under the record label Quality Control Music. The label features artists such as Lil Baby, Gunna, Lil Yachty, Cardi B, Migos, and several notable others.

Two sons and a daughter were born to Marlo and his baby mama.

His daughter Kemora— who would’ve been 9 in 2020— passed away in 2017 for an undisclosed reason. But his frequency of remembering his daughter in his Instagram displays pain he must’ve felt because of the unfortunate loss.

With Marlo’s burgeoning status and connections, certainly, women were flooding his DM which we can only imagine. But Marlo kept his relationship status a secret.

Any girlfriend prospects and details on baby mama had eluded the public eye as of 2020.