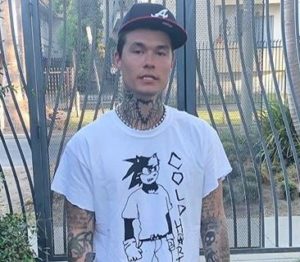 It is rare to see a rapper juggling two different styles at the same time, but Southern-Cali-based rapper Drippin So Pretty does it all comfortable. The rapper is best known for his ability to perform as a trap as well as an emo rapper.

With the release of his debut album True Love, True Pain in April 2019, Drippin made headlines with songs like Homesick, Sick In The Head, and True Pain which has secured 100K+ plays on Soundcloud as of February 2020.

This wiki-style article brings you details on the rapper so scroll through as the information unfolds.

Most of his time was occupied either surfing or skating when he was growing up.

Drippin attended high school but he was mixed up with the wrong crowd. He used to hang out with older students who were doing drugs like Xanax and ecstasy.

By the year 2010, he was already hooked to Heroine and struggling to let go of the habit.

Drippin is yet to shed some light on details on his parents as of February 2020. He has a younger sister who attended the same school as Brennan Savage, a frequent collaborator in Drippin’s projects.

As of February 2020 when this article was penned, Drippin So Pretty had released 2 albums along with other projects.

Drippin debuted his career as a rapper with 2016 Still Broke Off. It was a 9-track project out of which title track Still Broke Off, and Lil Drip Big Drip garnered over 100K+ plays on several audio streaming platforms.

Following that, Drippin went on to release projects like Locked in My Head (2017), I Need A Coupe (2017), and  I Need A Coupe 2 (2017). With these projects, he started experimenting with his emo-rap which proved to be a major sound shifting.

In 2018, Drippin released more projects to keep his fans hooked on him. Drag You Through My Hell, Worthless and So Many Tears were his offering for his dedicated fan followings.

Following the album, he released an album titled Die For You in October 2019. Die for you, Going 90, Tattoos Of My Dead Friends, and Go For A Ride Featuring Lil Tracy were some of the hit records out of the album.

Talking about his tattoos, he got multiples of them across his chest over to both ends of his wrists for several purposes. He was worthless written right under his chin. He got names tatted on his arms in the commemorating his friends who passed away to opiates.

Drippin So Pretty had a girlfriend when he was not a full-time musician. So he isn’t gay. But vivid details of his girlfriend has not been revealed yet.

In an interview with thefader.com, Drippin mentioned his girlfriend where he said,

… I went to jail for a second, and, when I got out, I hit up my girlfriend because I had nowhere to go. She was about to be done with me, but she knew I was probably going to die or something so she let me move in with her in LA.

Besides this interview, he never clearly spoke about dating anyone else. His social media accounts were far less useful to dig out personal pieces of information as he was rarely active there.

Annabella Sciorra is best recognized as Gloria Trillo in The Sopranos (2001-2004). Besides her acting career,...