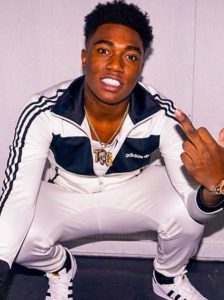 Fredo Bang rose to prominence when rapper Kevin Gates acknowledged his work. Kevin and Fredo collaborated on the remix of the latter’s hit song Oouuh.

The Louisiana rapper intended to speak to the youth of his hometown through his music. Also, Fredo planned to inspire to make it out of the hood and flourish as he did.

This wiki-style article explores the life of Fredo Bang along with his career and rumors on kids and baby mama.

Fredo Bang was born on 29 March 1996. The rising rapper turned 24 years old while celebrating his birthday in March of 2020.

Circa 2020, many online news portals circulated fake news on the rapper found dead during a shoot out in a studio. So, to address the question: Is Fredo Bang Dead?

No, Fredo was still alive — at the time of penning this wiki-article.

Also, the same applied to the info on his possible siblings.

As of April 2020, Fredo had already lost two of his closest friends and had faced two and a half years of prison stint for attempted murder and illegal use of fire-arm.

Both in middle school and high school, Fredo was a band member. In 8 years of playing as a part of the band, his skill as a clarinet and French horn player developed extensively.

Along with the promising rap career, the “Father” hitmaker created quite a fanbase along the way.

The growth of Fredo’s YouTube channel also had quite an impact on his career as a rapper. As of April 2020, the platform flaunted 393k subscribers.

Speaking on distinct features on Fredo, the Baton Rogue-born rapper inked multiple tattoos all over his body.

A tattoo on his chest dedicated to Gee Money — his best friend, The Monkeys denoting hear no evil, see no evil, and a big 8 on his shoulders dedicated to his another partner who passed away were some of his favorite tattoos with a meaning attached to it.

The “Dawg Gone” hit-maker often cited his upbringing and his surrounding as his musical inspiration. The rough neighborhood of Louisiana molded his style furthermore which helped create buzz for him.

Along with that, the death of his two friends and 2.5 years of a long prison stint brought clarity on finding his purpose. Later, it not only proved to be his career but also take on the responsibility of his family.

Fredo started his career by releasing his song titled Boss shit in 2015. The song featured his fellow rapper, Brown Gotti.

At the time, Fredo was associated with a rap group named Top Boy Gorilla (TBG).

On 19 September 2017, TBG released an 18-track album titled Long Live Gee. The album featured hit records such as Rainy Days, In My zone, and few notable others.

Fredo Bang avoided openly discussing his relationship status. He has certainly dated a few on his days in college.

The “Def Jam” signee had also mentioned a girl in his school days who he liked quite a lot. Him being in the school band was just to get her attention in the first place.

Besides that, Fredo never mentioned having any girlfriend or a baby mama.