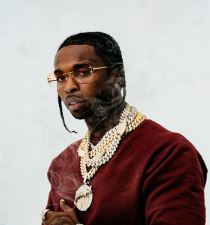 Often labeled as the godfather of the New York drill scene, Pop Smoke announced his arrival in the mainstream with the sprawling 2019 single “Welcome to the Party.” His gravelly vocal projections coupled with the rattling, erratic 808melo production proved a winning formula.

Stereogum slapped him with the label of “New York Rap’s Next Great Demon” in a Feb 2020 article. In it, the publication compared his style to that of Hip-Hop icon DMX.

For an in-depth look into his death, net worth, dating life, and biography follow through!

On the wee morning of 19th February 2020, TMZ reported that Pop Smoke died after getting shot in a suspected home invasion robbery.

Around 4:30 AM, 2 men donning masks and hoodie broke into Pop Smoke’s Hollywood Hills mansion. They then shot the rapper multiple times before fleeing the scene on foot.

A wounded Pop Smoke was rushed to the West Hollywood-based Cedars-Sinai Medical Center where he got pronounced dead.

Law enforcement agents placed a man in handcuffs but later released him after determining that he wasn’t involved.

As mentioned above, TMZ initially reported that only two intruders broke into the property rented by Pop Smoke. Later, the publication corrected it to four.

Days after his death, Jonathan Tippet — Robbery-Homicide Division Captain — agitated to call the crime “a robbery.”

Law enforcement agents also hinted that Pop Smoke may have been killed because of his gang ties with the Los Angeles-based Crips.

According to TMZ, the “Dior” rapper had canceled his concert in Brooklyn over the fear of possible gang-related issues.

Pop Smoke hailed from Brooklyn, New York — Canarsie, to be more specific. Also, he was born on 20th July 1999.

Bestowed with the real name Bashar Barakah Jackson, Pop Smoke inherited Jamaican and Panamanian ancestries from his biological mom and dad respectively. What’s more, He was also siblings with a sister.

Gifted with a glistening set of teeth, Pop Smoke boasted five feet & ten inches plus height. If not for rapping, he could’ve easily passed for a model.

Pop Smoke sort of stumbled into the art of rapping. Circa 2018, he was accompanying associates during studio sessions. Inspired by the experience, the Brooklyn emcee began recording vocals.

For his first single, he remixed Sheff G‘s classic “Panic Pt. 3.” His followup record was “Welcome to the Party.”

Pop Smoke’s merchandise was as recognizable as his signature growly vocal. The income, in turn, added to the “Dior” wordsmith’s $1.5 million net worth.

Run-Ins With The Law

In January 2020, Pop Smoke was arrested at JFK in New York for transporting a Rolls-Royce Wraith over state lines.

Per the plaintiff, the “MPR” hitmaker borrowed the Rolls-Royce Wraith for a music video shoot in exchange for a VIP concert ticket. He never returned the said vehicle.

Upon his arrest, Pop Smoke pleaded not guilty and posted $250k in bail money the very day.

Back in October 2019, NYPD had asked the Rolling Loud festival to block him and others from performing citing safety concerns. To everyone’s surprise, the organizers complied.

Pop Smoke was involved in a very public social media spat with a photographer Paris Marley in February 2020. The “GATTI” hitmaker accused Paris of sharing unflattering photos of himself.

To his surprise, Marley posted more images of the rapper from the same photo session.

Before his passing away in February 2020, Pop Smoke was reportedly child-less and therefore, didn’t have a baby mama. He never became a married man and didn’t have anyone to give the tag of his wife.

Coming to his love life, Pop Smoke allegedly was dating Instagram baddie Jazzy Mulani aka BK Jazzy around 2019. Interestingly, neither he nor his rumored girlfriend flaunted their romance on social media.

An Instagram model, Jazzy Mulani boasted 311k followers on the photo-sharing app (as of February 2020).