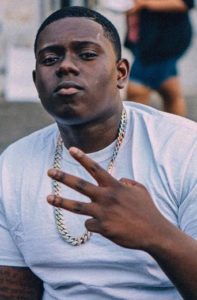 Of all the pioneer figures known for establishing a new sub-genre for hip hop named Brooklyn Drill, Sheff G is the name that shouldn’t be missed.

Bagging hit songs like We Getting Money and Feel Ah Way, rapper’s name can be heard along with the hip hop acts from the same genre like Fivio Foreign and late Pop Smoke who passed away in February 2020.

Delve into this wiki-style article as it unfolds personal and professional details on the rapper.

Born into a Caribbean household, the “Feel Ah Way” rapper grew up in Flatbush, Brooklyn, New York in a one-bedroom apartment. All of his relatives are of Haitian and Trinidadian descent.

In high school, Sheff got into a lot of trouble for being involved in fights and suspensions.

One particular incident that involved pointing guns because of the feud he had outside King’s plaza – a shopping center in Brooklyn – cost Sheff the close-by approaching graduation. The debacle eventually led him to drop out of school. He was arrested followed by probation.

Like most of the typical black family, Sheff G grew up on family and relatives getting together feasting on grandma’s recipe every Sunday. Music was ever-present, particularly Soca music from the Caribbean region.

But Soca didn’t resonate as much as hip hop did to Sheff.

Early on, Sheff was raised on 50 Cent and Eminem. As he went on exploring new artists, music from Chief Keef, G Herbo and Lil Durk made sense to him the most. The gang-life subject matter showcased more relevance which led him to lean towards that particular sub-genre.

In 2017, Sheff’s decision to step inside the studio with the Brooklyn drill sound with his clever wordplays changed everything for him. With the recording of No Suburban, he found a career path which he had never thought of pursuing before.

No Suburban was his breakthrough hit putting him on a pedestal of New York’s Hip Hop’s youth movement.

With an unfazed persistence, Sheff debuted his 12-track project The Unluccy Luccy Kid, in 2019. With the project, Sleepy Hallow too shared the spotlight accompanying Sheff G in 7 tracks in total.

Even with all the camera’s following Sheff G around all the time, he successfully kept his dating life a secret.

No possible girlfriend-prospect has made it to the spotlight to get the attention of all the fans out there. Nobody came forefront declaring themselves as Sheff’s baby mama craving attention.

This somehow approved that Brooklyn-based drill rapper was focused on cementing his career rather than dating and getting cozy out in public.

According to 31st May 2021 reports, Dallas rapper Lil Loaded passed away. Ashkan Mehryari, the attorney for...

Tadoe — as known as Tadoe Da Savage — hit the limelight as the “GloGang” artist. Beyond his...