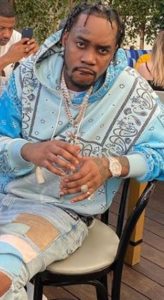 With Brooklyn drill music pushing its way to the mainstream sound, many names like Pop Smoke and Sheff G popped up.

But Fivio Foreign took it to the highest of the heights with his song Big Drip which has over 28 million views on YouTube alone as of late-April 2020. Braggadocio East Coast taste blended with high paced U.K. Grime inspired sound, Hip Hop fandom has somebody to keep their eyes and ears to.

Welcome to the wiki-style article based on the life and career of Fivio Foreign. Also, before we delve into his relationship and career, let’s dig into his gang ties and upbringing!

Reportedly, he represents himself as a Crip Gang member in his hometown of Brooklyn.

Details on the rapper’s personal life are not public yet. Furthermore, his parents are mentioned occasionally in his songs, and most of the charity works he does are all dedicated to his mother.

Moreover, as a child, Fivio was close to nature. He enjoyed playing and collecting rocks. But the famed rapper couldn’t finish his education enough to pursue the career of a geologist.

Fivio set off his career as a featured artist. He gave his guest verse to Gino Mondana for the single Like Some Stars in 2014. In 2018, he was credited for the feature with Jay Dee in Gimmie Dat and Alshawn Martin for Act Out.

As for his project, Fivio dropped his debut EP Pain and Love in June 2019. The album was released under the record label Foreignside Records. The song Big Drip from the EP became a hit record, making him a viral sensation.

The music video for Big Drip was released in August 2019. It was shot and directed by JLShotThat.

Moreover, Fivio signed with Columbia Records for a seven-figure deal in October 2019.

Fivio made stage appearances with rappers like Juice WRLD and made a song titled K Lo K with Tory Lanez. Also, he collaborated with Flatbush-native rapper Fetty Luciano and came up with the project titled Grimey Demons.

When 2020 came around, Fivio’s stock had grown exponentially. Even Drake reached out to him for a feature.

Like all the young rappers, Fivio Foreign is out there having fun. Most of his dating and relationships have eluded the public eyes.

But in 2019, Fivio Foreign was spotted getting cozy with Sarah Snyder. He and his IG model girlfriend went live on Instagram several times. Their dating status as of February 2020 was still hazy.

In an interview with YouTube channel Thisis50, he mentioned having a new girlfriend. 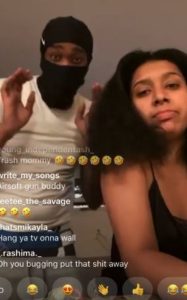 Also, Fivio mentioned living together with all his baby mama and avoided giving away names and passed it off as a joke.