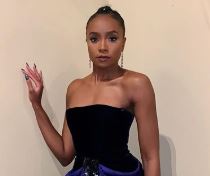 KiKi then became popular for portraying the character Nine in the Netflix action flick “The Old Guard.”

Continue reading and become familiar with KiKi Layne’s boyfriend, dating, and net worth. Also, discover info about her parents, siblings, and measurements!

Asked about her last birthday in January 2020, KiKi Layne shared she had a fish fry.

True to her zodiac sign (Sagittarius), KiKi admitted she was warm and fun once people got to know her.

KiKi Layne was born to her African-American parents in Cincinnati, Ohio.

In her family, KiKi Layne also had two brothers — who were happily married to their respective wives. Furthermore, the Layne siblings grew up as a close brood. 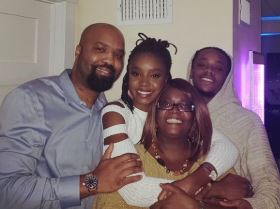 For KiKi and her brothers, their mother was their father. She was their biggest support system.

When she recieved an invitation to attend the 2019 Oscars, KiKi picked her mom to accompany her. Additionally, she posted a heartful message on IG. An excerpt read:

“Mommy we made it to the Oscars. Can’t even really describe what this moment meant for us. We sacrificed and worked so hard to get here… “

“My Mommy has been my number one fan and supporter the whole way. Giving everything she had and more to help my dreams come true. Even when I doubted myself, she always believed in me… “

No doubt, family meant everything for KiKi.

Surely KiKi understood the power of wider social media reach. However, she was only active on Instagram. On the platform, the beloved actress flaunted 55.5 thousand followers.

KiKi then recieved a BFA degree from The Theatre School, DePaul University. There, she honed her acting chops.

In 2016, KiKi made her TV debut with “Chicago Med”. Later that year, she starred in the Untitled Lena Waithe Project.

However, 2018 proved the breakout year for KiKi. For her performance on James Baldwin-adoption “If Beale Street Could Talk,” she earned numerous accolades including Gotham Independent Film Award for Breakthrough Actor.

2019 saw KiKi starred in feature films: “Captive State” and “Native Son”. A year later, she returned with “The Old Guard.”

In early 2019, dating rumors flared as partygoers saw Kiki Layne getting cozy with actor Michael B. Jordan at sundance.

According to witnesses, Kiki and her rumored actor boyfriend arrived 10 mins apart at the Park City, Utah-based Tao’s pop-up club.

“They were put at separate VIP tables, but Kiki quickly made her way over to Michael’s table. And they seriously never left each other’s side. Canoodling to the max.”

The insider then added:

“She would have her hand on the back of his head rubbing it as he whispered in her ear and [he] kept kissing her cheek.”

Per the same source, despite KiKi and Michael giving off couple vibes, they opted not to take pictures.

To the dismay of KiKi’s fan, the outing was a standalone incident. She never confirmed Michael as her boyfriend.

As of Summer 2020, KiKi seemed single. Nothing on her IG suggested she was seeing anyone.

Before KiKi, Michael was romantically linked with co-star Lupita Nyong’o. However, they would deny the dating rumors.

Often labeled as the godfather of the New York drill scene, Pop Smoke announced his arrival in the mainstream...

Barry Jenkins is an unapologetically black filmmaker. His nuanced take on the African-American experience,...